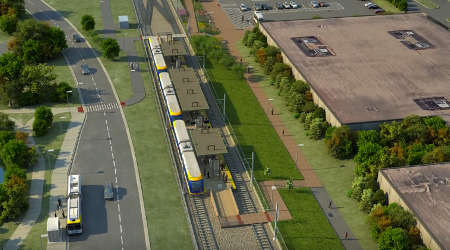 Metro Transit on Aug. 15 plans to open bids for the first construction contract for the Southwest light-rail line in Minnesota.

The work includes building 29 miles of track, 15 stations, eight park-and-ride facilities and two cut-and-cover light-rail tunnels, and modifications to seven existing bridges. The agency anticipates that the contract will be awarded in November.

Meanwhile, the Metropolitan Council expects to issue an additional contract this month for specialty freight track related to the project. That contract needs to be awarded this month to allow enough lead time for production and delivery of track material in March 2018, council officials said in a newsletter. That will ensure the freight track relocation work will begin on schedule, they added.

In addition, the council later this year plans to seek bids for construction of a light-rail operations and maintenance facility in Hopkins.

Slated to cost $1.858 billion, the Southwest line will run from downtown Minneapolis through St. Louis Park, Hopkins, Minnetonka and Eden Prairie. The line, which will include 15 new stations, is an extension of Metro Transit's Green Line light-rail route.