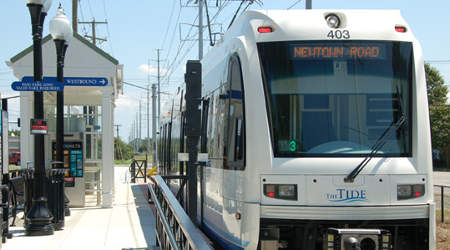 Hampton Road Transit (HRT) next week will hold a public meeting to discuss a potential light-rail expansion to the U.S. Navy base in Norfolk, Va.

Naval Station Norfolk (NSN) is the region's largest employment center. Of the 60,000 to 70,000 people working at NSN and nearby facilities, more than 30 percent live in Norfolk, HRT officials said in a press release.

The transit extension also could connect downtown Norfolk to other points in the city, such as Old Dominion University and other residential, retail and commercial areas.

HRT and city officials started the process of evaluating potential high-capacity transit extensions to NSN as part of the Naval Station Norfolk Transit Extension Study, which was completed in 2015.

The meeting will take place June 15.