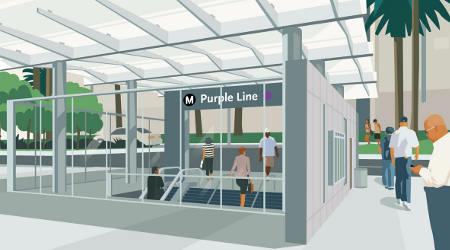 The project's second phase involves extending the Purple Line subway 2.6 miles with two new stations. The SEIS expands on a previous environmental analysis conducted for the full project between 2007 and 2012, Metro officials said in a press release.

The new report presents additional information on the Century City Constellation Station, as well as public health, construction and other impacts for the planned subway alignment. The document also includes seismic studies.

The meeting on the SEIS will take place June 22.

Major construction of the second phase is slated to begin in 2018, with completion no later than 2026 per Metro's agreement with the Federal Transit Administration. However, Metro aims to finish the project by 2024 before the Summer Olympics. Los Angeles is under consideration as a possible location for the Olympics.

In January, the U.S. Department of Transportation pledged $1.6 billion toward the Purple Line extension's second phase as part of a Full Funding Grant Agreement.

Local funding, which will provide $747 million toward the project, came from the Measure R half-cent sales tax that L.A. County voters approved in 2008.

The project's second phase is estimated to cost $2.4 billion. The total cost for the overall Purple Line extension is $6.3 billion, according to a project fact sheet.