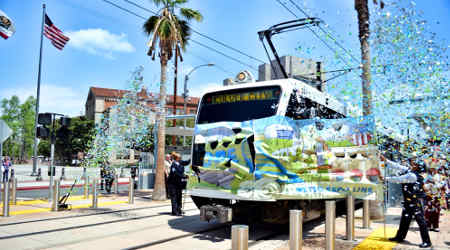 The line has become the second busiest of Metro's four light-rail lines, agency officials said in a press release. Only the 22-mile Blue Line between downtown Los Angeles and Long Beach has more riders.

In April, the Expo Line served 1,507,590 total passengers, while the Blue Line logged 1,764,425 riders, according to Metro's estimated ridership statistics.

This month, Metro also will mark the first anniversary of the Expo Line's extension from Culver City to Santa Monica. That route opened in late May 2016.

"We made history with the opening of the Expo Line extension a year ago — and the extraordinary ridership shows that Angelenos are ready for the future of public transportation," said Eric Garcetti, Los Angeles mayor and Metro's first vice chair.