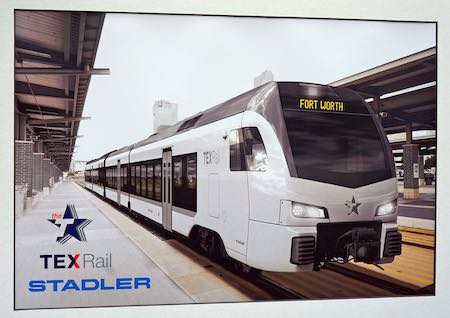 Source: Fort Worth Transportation Authority
The 27-mile commuter-rail route will run along existing freight tracks, which will be rehabilitated as part of the project.

In 2006, Grapevine voters approved a half-cent sales tax measure to help finance TEX Rail, which is being built by the Fort Worth Transportation Authority (FWTA). The more than $1 billion project isn't yet fully funded, but the Federal Transit Administration (FTA) in June granted FWTA permission to begin construction.

The FTA's "letter of no prejudice" allowed FWTA to start spending the local funding it has in reserves while awaiting a full funding grant agreement.

The line will extend from downtown Fort Worth, across Tarrant County, through North Richland Hills and Grapevine, and into Dallas/Fort Worth International Airport's Terminal B. Service is scheduled to begin in 2018.