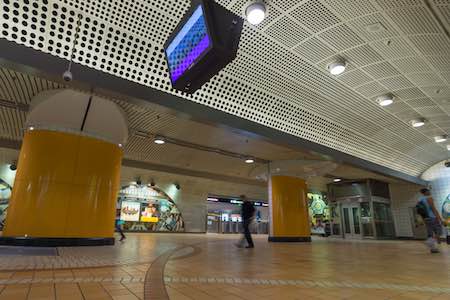 The agency's contractor knocked out an existing panel within the Red Line mezzanine, excavated a passageway and built stairways, escalators and dual elevators to reach the Orange Line station.

The project marks the agency's latest effort to build safer pedestrian connections to its system, Metro officials said in a press release. The tunnel is expected to save riders four to five minutes when walking from an Orange Line bus to the Red Line platform.

"By letting riders make connections underground, we’re making it easier to transfer between the Orange and Red lines, and easing congestion for drivers on Lankershim [Boulevard]," said L.A. Mayor Eric Garcetti, who is first vice chairman of Metro's board. "This is a smart project that helps valley commuters and strengthens our regional transportation system."

The design-build project cost $22 million and took about two years to complete. The U.S. Department of Transportation contributed a $10 million "livability and sustainability" grant to help pay for the project, Metro officials said.