New Jersey Transit has rolled out the first expanded light-rail vehicle on the Newark system, the agency announced earlier this week. 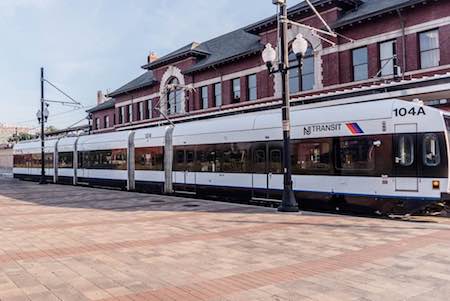 The unit is first of 10 expanded vehicles for the system, NJ Transit officials said in a press release.

NJ Transit has been using a prototype of the expanded light-rail car on the Hudson-Bergen line for nearly three years "with great success," agency officials added.

As part of a program approved by the agency's board in July 2014, a total of 35 light-rail vehicles were authorized for expansion, with 25 slotted for the Hudson-Bergen line and 10 for the Newark system. The agency is modifying the vehicles in response to customers' calls for more capacity, NJ Transit officials said.

"The roll out of this new expanded vehicle on Newark Light Rail allows for 50 percent increase in capacity per car, which will help us to alleviate crowded conditions particularly at the platform level," said NJ Transit Interim Executive Director Dennis Martin.

The agency partnered with Kinkisharyo International LLC and Twenty-First Century Rail Corp. to find a solution that wouldn't significantly impact system infrastructure or require a costly investment in new cars. Kinkisharyo then developed a design for an expanded vehicle that adds two additional sections to the existing light-rail vehicle, increasing the number of sections from three to five.

The retrofitting work costs about $1.55 million per car. More than 80 percent of the project costs are federally funded under the Congestion Mitigation and Air Quality Improvement Program jointly administered by the Federal Transit Administration and the Federal Highway Administration.