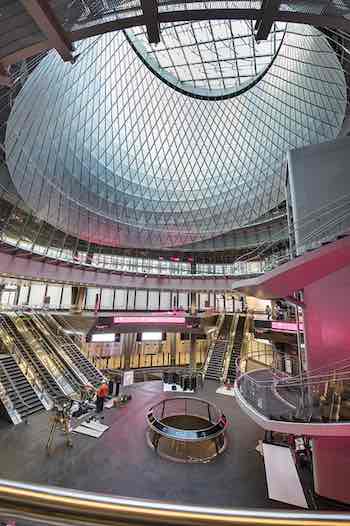 The $1.4 billion center is the agency's first subway station to receive a LEED rating, MTA officials said in a press release.

Half of the energy at the center comes from renewable sources.

"The Fulton Center has been the recipient of a number of awards and honors, but this designation is truly special," said MTA Capital Construction Co. President Michael Horodniceanu. "It shows how we married the old with the new to create a state of the art transportation hub, shopping destination and office facility while keeping the environment top of mind."

Encased in a glass and steel shell, the facility accommodates up to 300,000 daily customers using several subway lines. The Fulton Center also houses nearly 66,000-square-feet of retail and commercial space, along with the MTA's largest digital advertising program.

The center was partially funded by $847 million from a special congressional appropriation after the Sept. 11, 2001, terrorist attacks on New York City. Known as the Lower Manhattan Recovery Grants, the funds were intended for local transit agencies to repair, replace and enhance transportation in the area. The MTA also provided $130 million in local funds.

The remaining $423 million came from the American Recovery and Reinvestment Act.