For the project to move forward, the cities needed to approve the line's design components such as tracks, bridges, stations, roads and support structures, according to a press release issued by the Metropolitan Council, which oversees Metro Transit.

The extension — also called the Bottineau light-rail transit project — will expand the existing Blue Line from Target Field in downtown Minneapolis into the northwest suburbs through Golden Valley, Robbinsdale, Crystal and Brooklyn Park.

"Successfully gaining municipal consent speaks to the strength of this project,” said Adam Duininck, Metropolitan Council Chair. "We have had strong partners in the cities, the county, and the businesses all along the line."

When completed, the line will offer a one-seat ride from Target's master-planned office campus in Brooklyn Park to the Mall of American in Bloomington, with stops throughout Minneapolis and at the Minneapolis-St. Paul International Airport. Passengers also will be able to transfer to the Green Line to get to the University of Minnesota or downtown St. Paul.

In December 2015, the Metropolitan Council approved the project's scope and $1.5 billion cost estimate. In August, council staff will finalize the 30 percent design plans and specifications and apply with the Federal Transit Administration to enter the engineering phase of the project, council officials said. 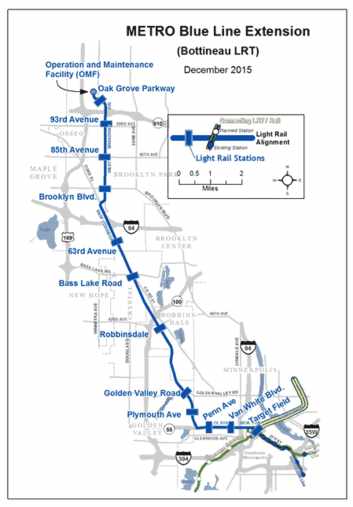 A map of the Metro Blue Line Extension
Source: The Metropolitan Council