The city has the option to purchase a fifth vehicle for the lakefront line extension, Milwaukee Streetcar officials said in a press release.

Each 67-foot-long vehicle will be able to hold 150 passengers and have two doors per side. They'll also be equipped to provide access for wheelchairs and bicycles. 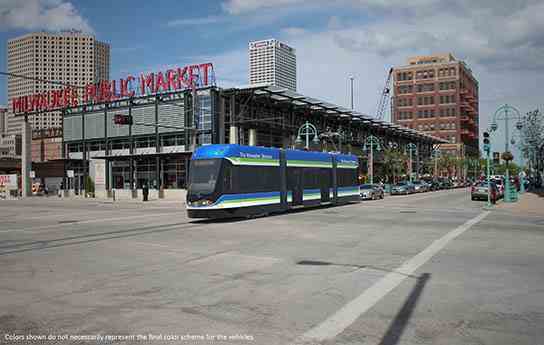 Milwaukee Department of Public Works Commissioner Ghassan Korban said that Brookville was chosen because the company's proposal received the highest ranking from the evaluation committee and demonstrated the best value. The committee had  reviewed four proposals, ultimately recommending city staff to enter into final negotiations with Brookville.

Milwaukee is exploring opportunities with those other systems to share spare part inventories and reduce operation and inventory costs.

The cars will be manufactured at Brookville's Pennsylvania plant, with the first vehicle slated to be delivered in two years. The manufacturer will comply with the federal "Buy America" provisions, which require that the vehicles be produced with at least 60 percent domestic content and that final assembly take place in the United States.

Milwaukee Composites Inc., a Cudahy, Wis.-based supplier of flooring for mass transit vehicles, will donate flooring for the four units.

Funding for the vehicles comes from federal grants. No city property taxes will be used in the construction of the vehicles or other parts of the streetcar network, Milwaukee Streetcar officials said.

The city's streetcar implementation committee on Sept. 25 authorized the Department of Public Works to negotiate terms of the deal with Brookville.