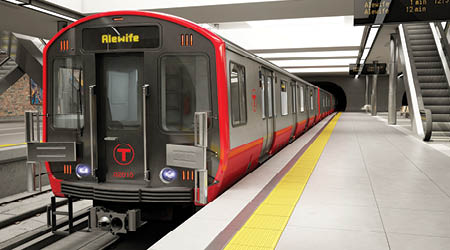 Two years ago, a series of unforgiving winter storms pummeled the Boston area. In February 2015 alone, a record 64.8 inches of snow blanketed the region.

The storms had a devastating effect on the Massachusetts Bay Transportation Authority's (MBTA) commuter-rail system, which reported an average on-time performance rating of 33 percent that month. The agency's locomotives sustained significant damage as they struggled through the snow.

While crews worked to dig out the system, the MBTA ran trains on limited schedules and even shut down service entirely on some segments.

After the February storms, it took weeks for the agency's commuter-rail service to return to normal. In the wake of the service disruptions, Beverly Scott resigned as the MBTA's general manager, while Massachusetts Gov. Charlie Baker formed a panel to perform a comprehensive review of the agency. He also established a fiscal management and control board to keep closer tabs on the MBTA's finances.

The panel's findings painted a bleak picture of the agency, known locally as The T.

"The catastrophic winter breakdowns were symptomatic of structural problems that require fundamental change in virtually all aspects of the MBTA," the group's report stated.

Those problems included ballooning operating expenses, poor customer service and a general lack of accountability. The MBTA also had failed to use available funding to pay for much-needed infrastructure repairs and improvements, according to the report.

Since then, however, the MBTA has made progress on several fronts, including boosting on-time performance, cutting costs and modernizing its system. Although more work remains, agency officials and observers say The T is headed in the right direction.

"We've seen a series of improvements and also different ways of doing business," says Joseph Aiello, chairman of the MBTA's fiscal control board. "The commuter-rail system is not where we want it to be, but it's significantly better than it was when we stepped in."

And indeed, the metrics are trending in the right direction: For 2016, the commuter-rail system's on-time performance came in at 89 percent across all lines. When adjusted for factors beyond the operator's control, such as trespassers, that figure rose to 94 percent.

Hiring additional locomotive engineers and conductors has helped improve performance, says David Scorey, general manager of Keolis Commuter Services, which has a contract to operate The T's commuter-rail system. The company brought on 100 more conductors over the past year. 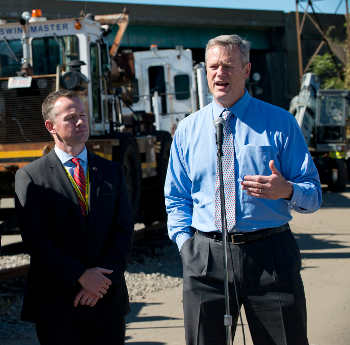 For this particular railroad, there's a strong connection between on-time performance and the number of conductors and engineers on hand, Scorey says.

"That's because a lot of the operations are quite manual, so it's directly affected by having the right number of people," he adds.

The company also repaired the commuter-rail fleet by replacing more than 200 traction motors that were damaged during the winter of 2015.

"The locomotives were damaged quite substantially, and a lot of traction motors were damaged as a result of trying to get through the snow," Scorey says.

At the same time, Keolis is banking on new technology investments to improve overall operations. For instance, the company has equipped field workers with virtual reality glasses that transfer live video to senior technicians at the main maintenance facility. The technology is intended to allow Keolis' maintenance experts to diagnose problems more quickly and reduce repair times on equipment that's away from the shop. The company's also considering using drones to assess vegetation clearance needs throughout the system.

Furthermore, Keolis has formed "rapid action groups" to investigate lines that have the most performance issues and identify solutions. For instance, one group called for adding extra conductors on Worcester Line trains, whose on-time performance was lagging.

In addition, the group made sure there were engineering and signaling staff readily available in case any technical issues cropped up.

While Keolis works on improving commuter-rail operations, the MBTA is trying to get its financial house in order.

Baker's 2015 report found that the agency's operating budget had grown at an unsustainable pace over the past 15 years. In fiscal-year 2000, for example, operating expenses came in at $711 million; by fiscal-year 2017, they soared to $1.67 billion. Ridership has risen slightly since then — growing from 355 million annual trips in FY2000 to 391 million in FY2016 — but it hasn't increased enough to keep up with the agency's ballooning costs.

The agency's biggest cost-cutting strategy has been renegotiating its contract with the Boston Carmen's Union Local 589, which represents more than 6,000 MBTA workers, including bus and light-rail operators. In December 2016, the union and the MBTA reached a new four-year agreement, which includes reform for overtime pay.

Previously, workers could qualify for overtime any day that they worked more than eight hours. Under the new agreement that went effect Jan. 1, employees won't be eligible for overtime pay until they've worked their 40 scheduled hours in a week's time, says Brian Shortsleeve, the MBTA's chief administrator and acting general manager.

The new pact is expected to save the MBTA $80 million over the next four years, agency officials estimate.

"The renegotiation of the carmen's union deal was really a milestone moment for the MBTA in terms of resetting our relationship with the union," Shortsleeve says. "Not only are we going to save hundreds of millions of dollars, but we've also now got in place some really important productivity measures that will help us run the system better."

Those measures include the change in overtime policy, as well as a pilot program that will allow bus and rail operators to work four 10-hour days rather than five eight-hour days. The program is expected to make work scheduling more efficient, agency officials say.

In addition to a fare increase that went into effect July 2016, the MBTA is finding new sources of revenue by selling advertising space.

"That's another thing that I think long term has been a big opportunity for us," Shortsleeve says, referring to the MBTA's "own source revenue" projects, which include funds from ad sales, real estate revenue and parking. "But in the aggregate, the revenue growth story has been and will continue to be under 2 percent a year, which means to balance our budget we need to control our cost growth at or below that rate."

To that end, the MBTA has trimmed costs by eliminating more than 200 redundant corporate and administrative positions through a voluntary retirement program. The agency's also renegotiated or rebid contracts with other service providers.

Another small way the MBTA continues to "mind the store" involved suspending 550 employee mobile devices after a report showed that a third of agency-owned cell phones weren't actually being used. The MBTA also resized its minute pool to reflect actual usage, Shortsleeve says.

The T's adjustments to its mobile phone plan are expected to result in $650,000 a year in savings — a small amount, but "every dollar counts," Shortsleeve says. 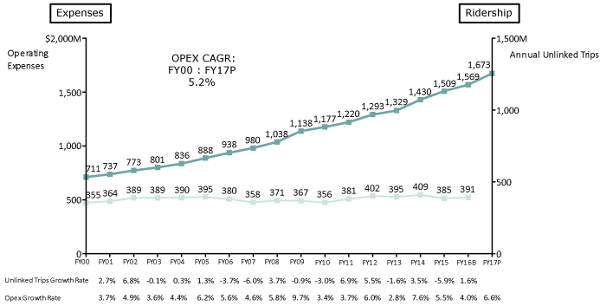 Over the last 15 years, the MBTA's operating expenses have outpaced ridership gains.
(Click on the chart to view larger.)

As the MBTA works to drive down costs, it's refocusing on state-of-good-repair efforts. Historically, the agency has spent $500 million to $600 million on these kinds of projects.

But to stay on top of its mounting state-of-good-repair backlog over the next 25 years, the agency would need to invest $760 million annually in core system maintenance, Shortsleeve says. As of August 2015, that backlog stood at about $7.3 billion.

"The T has struggled to execute its capital delivery plan. We were spending less each year and not getting critical system upgrades," says Shortsleeve.

One key capital project includes modernizing The T's subway fleet for the Red and Orange lines. In December 2014, the agency awarded a $656 million contract to China CNR Corp. Ltd. to build 284 new subway cars for the lines.

The Chinese state-owned company, which later merged with CSR Corp. Ltd. to form CRRC Corp., was tapped to build 132 cars for the Red Line and 152 for the Orange Line. Two years later, the MBTA's fiscal control board voted to order 120 additional cars for the Red Line from CRRC MA Corp., a local subsidiary of CRRC.

The new units will replace the MBTA's entire Red Line fleet — a move that's expected to boost capacity by 50 percent, agency officials say. Because the new cars need less time to stop, the required headway between trains will decrease, allowing the agency to run more trains per hour.

In addition, the vehicles will be safer because they'll feature a crash energy management system to help withstand significant collisions, says Bobby Doyle, a senior consultant at CRRC MA Corp. In December 2016, the company completed all major testing of the cars' body structure.

"CRRC wasn't leaving anything to chance with this design," Doyle says. "We've just made it a beefier vehicle."

The Red Line cars have four doors per side, while the ones for the Orange Line have three. However, they'll use the same subsystems and parts, which will allow for interchangeable components between the two lines, Doyle says.

CRRC will assemble and manufacture the units at its plant in Springfield, Mass., with the carbody shells fabricated in China. Now under construction, the Massachusetts facility is expected to be completed in October. The company plans to hire more than 150 new workers at the plant, said CRRC MA Corp. Vice President Jia Bo in a statement.

To tackle its remaining repair backlog, the MBTA in November 2016 reorganized its capital project team to accelerate spending on maintenance projects. And although the agency is continuing to work on expanding service — such as through the Green Line light-rail extension — state-of-good repair and modernization projects remain the top priorities.

The shift from expansion to maintenance marks progress for the MBTA, says Charles Chieppo, a former Harvard Kennedy School fellow who's written extensively about the agency's longstanding problems.

Over the past 25 years, the MBTA has expanded faster than any other major transit agency in the United States, he says. 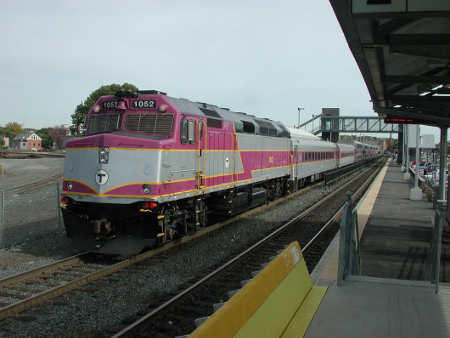 While he welcomes capacity-expanding projects on existing lines, Chieppo says the agency simply can't afford to pursue new subway or commuter-rail expansions at the moment.

"Things like that don't pay for themselves," he adds.

In December 2015, Chieppo wrote a report about ways to reform the MBTA. For him, the massive service disruptions earlier that year came as no surprise.

"The most amazing thing about the collapse of public transit … under the weight of Boston's snowiest winter in recorded history was not that it happened, but that it didn't happen sooner," he wrote in the report.

Since then, though, the MBTA has made strides by driving down costs and reducing employee abuse of sick time, Chieppo says. He hopes the agency will continue reducing expenses and generating enough revenue to cover at least half of its operating costs, which would be in line with other major transit systems.

"They've certainly made a lot of progress," Chieppo says of The T. "I'd say realistically, it's about as much progress as they could make given the starting point. I'm actually pretty satisfied."

The MBTA and Keolis aim to maintain that momentum in the future.