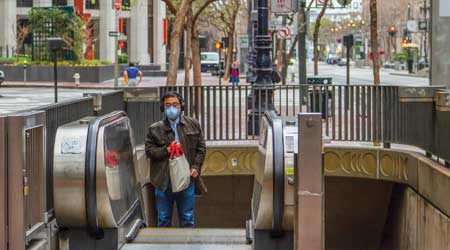 In January, General Manager Bob Powers was conducting an ongoing “listening tour” at Bay Area Rapid Transit’s (BART) subway stations and on trains, where he’d meet with riders to get their opinions on the agency’s service quality and policies. 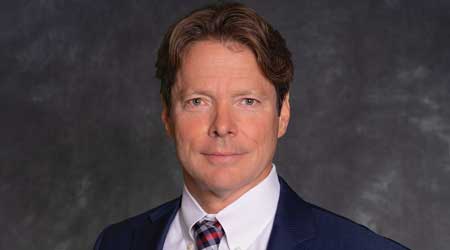 Powers was deputy GM for two years when he was tapped in July 2019 to succeed retiring GM Grace Crunican. He joined BART in 2012 as assistant general manager of planning, development and construction. A professional engineer, Powers had decades of experience in public transportation, overseeing major infrastructure projects and transportation programs.

So when he became BART’s top executive, Powers was charged with delivering its major projects — namely, the Fleet of the Future plan to replace aging rail cars; the system’s infrastructure rebuilding plan to replace worn rails, retrofit the Transbay Tube and update waterproofing in tunnels and other structures; the modernization of a 40-plus-year-old train control system; and the service expansion to Santa Clara County.

He also took control at a critical point for BART. In addition to those major projects underway, the agency was facing sliding ridership numbers.

“Our customer satisfaction levels are unacceptable,” Powers told The Mercury News last summer, pledging to hear directly from riders during a listening tour.

But less than a year later, the listening tour is on hold as Powers and BART’s board  — along with transit agencies across the country — figure out how to best serve the public during and after a global pandemic that has blown a big hole in agency budgets.

BART officials began discussing the coronavirus’s potential impact on the region in mid-January, when the first U.S. case became public knowledge. The agency, which prior to the pandemic had a contagious disease plan in place, formed an internal task force to begin tackling the issues. That group is still at work, says BART spokesperson James Allison, who responded to questions via email.

The agency took its first public-facing action on March 11, when it began installing hand-sanitizer dispensers at all 48 stations. After that, BART implemented a hiring freeze — the agency’s headcount was 4,452 employees. (As of April 16, none had been furloughed.)

By March 16, six San Francisco Bay Area counties had shelter-at-home orders. And by March 19, California Gov. Gavin Newsom issued a statewide order, which as of press time had no set expiration date. Newsome is coordinating with the governors of Oregon and Washington to reopen their states’ economies once six benchmarks are met.

Now, Powers and other Bay Area transit executives are spending all their time figuring out how to continue skeletal service during the public health crisis.

Powers has been speaking with his transit agency counterparts via conference and/or one-on-one calls almost daily, Allison says. The executives have coordinated their respective agencies’ service reductions to ensure a lifeline of public transportation remains in operation for the region’s essential workers; and they’ve discussed options for disbursing state and federal emergency funding to help address the pandemic’s impact on each agency.

Statewide, transit agencies’ ridership plummeted in the 70 percent to 90 percent range, with the steepest declines occurring on rail services, according to the California Transit Association (CTA). Ridership on BART, Caltrain, the Capitol Corridor and the Altamont Corridor Express rail routes dropped between 94 percent to 95 percent. BART’s daily ridership, for example, was 24,204 on April 22 compared to daily ridership of about 380,000 in early March.

The dramatic dropoff in ridership has had a devastating impact agencies’ budgets, according to CTA Deputy Executive Director Michael Pimentel.

The Metropolitan Transportation Commission (MTC) on April 22 approved the allocation of more than $780 million in federal Coronavirus Aid, Relief and Economic Security (CARES) Act stimulus funds for Bay Area transit agencies. MTC is the transportation planning, financing and coordinating agency for the nine-county San Francisco Bay Area. Developed by MTC and transit agency staff, the allocations represent the first of two distributions of the estimated $1.3 billion in federal funding that area’s agencies will receive under the stimulus bill.

The first allocation is intended to help the agencies meet the immediate crisis. As agencies assess the full scope of what they’ll have to do to ramp up in a post-pandemic recovery, the remaining CARES funding will be allocated, MTC officials said in a press release.

Of the first allocation, BART received the largest amount at $251.6 million. Additional state funding to support transit agencies’ response to COVID-19 likely will be evaluated this summer, as Newsom and the California Legislature prepare a fiscal-year 2020-2021 budget. 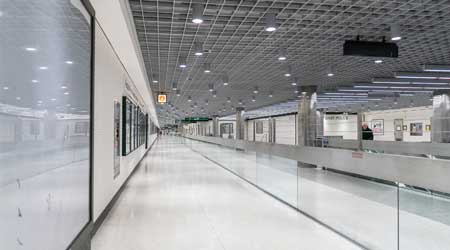 BART’s Powell Street Station in San Francisco was nearly empty on March 28. The city has been under a shelter-in-place order since March 16.

BART’s budget status has been shifting nearly every day. In an April 21 letter to MTC Chair Scott Haggerty, Powers noted the agency’s 94 percent ridership decline meant it was losing more than $9 million in fare revenue a week. The first CARES Act funding distribution will help stabilize its current fiscal-year budget, which has a projected shortfall of over $170 million, and help lift the FY2021 budget, which has a projected shortfall of $300 million to $500 million, Powers wrote.

While they’re able to provide skeletal service over the short run, BART’s and other California transit agencies’ full recovery from the pandemic will be challenging, says CTA’s Pimentel. The immediate benefit of the CARES Act is to stop the bleeding, but an additional infusion of stimulus funding will be necessary for the transit industry to get back to normal,“ he says.

“The worry in our state is the impact of the loss of sales tax revenue,” says Pimentel, noting California transit agencies’ major forms of funding include county-administered sales taxes that generate $1.7 billion a year.

“The agencies haven’t felt that impact yet. The collection of those taxes is ongoing, but disbursements have been on a quarterly basis,” he says. “Those receipts will come in at different times.”

Furthermore, some counties have their own sales taxes to pay for long-term public transportation expansion projects. When sales taxes take a hit due to lower ridership, those agencies will see a significant financial impact.

To prepare their turnaround plans, California agencies will seek guidance from the American Public Transportation Association (APTA) and its recently established Mobility Recovery and Restoration Task Force, which will convene May 1 and complete its work by Sept. 1.

On a more immediate level, officials will continue to communicate to the public how their agencies are keeping trains, stations and other facilities sanitized and clean.

Meanwhile, as Californians remain hunkered down at home to stop the spread of the virus, BART has turned to social media to remain in contact with riders and small businesses. It has updated its website and other social media channels daily. It also launched Virtually BARTable, a web feature that highlights the performing arts, entertainment, sporting events and other activities initially planned for venues near BART stations but have since moved online during the shelter-at-home period.

“Normally, we partner with hundreds of physical venues and events each year,” says BART’s Allison.

Moreover, BART is taking extra steps to support small businesses, including the more than 270 that serve as prime contractors and subcontractors on the agency’s construction projects. BART’s Small Businesses Support Services, which is part of the agency’s Office of Civil Rights, has hosted webinars on resources available to small firms, including one in March on how to access state and federal funding resources. More than 120 people attended that webinar, which featured speakers from the California Office of the Small Business Advocate and U.S. Small Business Administration.

Many transit projects have been designated essential public works as part of the region’s public health orders, and BART is a good example of agencies using the ridership lull to speed up infrastructure construction and rail system maintenance, says CTA’s Pimentel.

“Scaling back service gives the frontline maintenance crew more time to do track improvements to reach a state of good-repair so that when service is brought back at capacity, BART will be operating more smoothly with fewer incidents or breakdowns,” he says.

Others are following suit, particularly those with major capital construction projects. For example, Caltrain has continued work on its electrification project during the pandemic, Pimentel says.

“Projects like Caltrain’s electrification can move forward because our governor and state have identified construction workers in key industries like transit as essential workers,” he adds.

With service ending earlier on weekdays and starting later on Saturdays, BART has been able to build up “wrench time” — the period wayside work can be accommodated without revenue train interference, according to Allison. The addition of just a few hours a night is having a “dramatic impact” on infrastructure replacement projects, he says.

“Before BART moved the end of service to 9 p.m., workers were replacing 100 feet of running rail a night. With the earlier closing time, they’re now getting 500 feet of rail replaced a night,” Allison adds.

Plus, the earlier closing time has allowed electric cable replacement work in downtown San Francisco to start at 7 p.m. on weeknights. For every six weeks that crews can single track at 7 p.m., BART can eliminate six months of single-tracking work on Sundays, Allison says.

Once California’s shelter-in-place orders are rescinded, BART will take a phased approach to restoring service to pre-pandemic levels. How quickly that happens will depend on ridership demand, the condition of the operating budget and staffing. As of mid-April, the agency’s staffing level was stable, according to Allison.

To reassure the riding public, the agency will continue measures to protect health and safety.

“We are currently running all trains at maximum length, despite the fact that our ridership is currently at 6 percent of pre-pandemic levels,” said Allison. “This is to allow for physical distancing, and we are monitoring car-loading data to ensure adequate distancing is achievable.”

Also, BART will distribute free personal hand straps that riders can take home each night and wash or disinfect, he says.

In the bigger scheme of things, the agency will have a key part to play in bolstering the Bay Area’s economic recovery, BART officials acknowledge. The agency’s four-county service area connects to nearly every regional transit operator. Prior to the pandemic, BART carried 54 percent of all passenger miles on public transit in the region.

As Powers said in his letter to the MTC: “We must remain well-positioned to easily scale up service to meet demand.”