BART's 'Fleet of the Future' cars cleared for service 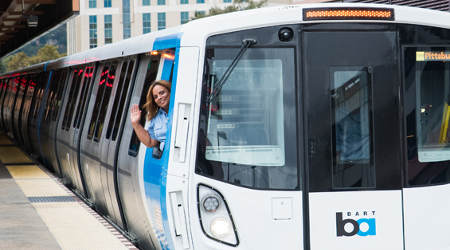 The first train is expected to enter service as early as today, BART officials said in a press release.

"This is exciting news for BART and our riders as it allows us to move forward with replacing the oldest big-city fleet in the nation," agency officials said. "The new cars will offer BART passengers a quieter and more comfortable ride while expanding our capacity."

BART gained the commission's approval after completing a comprehensive testing process. In July 2017, the agency began testing the first batch of the new trains on mainline track during business hours.

As part of the Fleet of the Future program, BART has ordered 775 new cars from Bombardier Transit Corp. The first 10 rail cars began arriving in spring 2016.

The agency plans to order a total of 1,081 new units. With that many new cars in service, the total number of seats in BART's fleets would increase by nearly 50 percent, according to the agency's website.