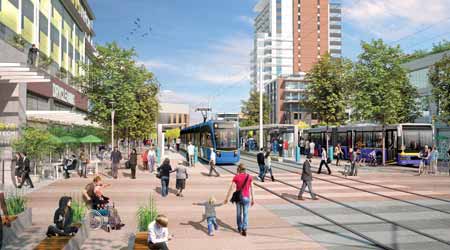 There’s a lot to like about Vancouver, British Columbia, if ongoing population booms in the area are any indication. Boasting an impressive skyline framed by Canada’s North Shore Mountains, this coastal seaport city has been regularly recognized for its high quality of life and plentiful job opportunities.

In Mercer’s 2018 quality of life ranking, Vancouver placed fifth, earning the highest ranking for a North American city. And as of June, the region’s unemployment rate sat at 4.3 percent, besting Canada’s other larger cities Toronto and Montreal, according to Statistics Canada estimates.

But as the population grows, the region is being hit with “rapidly escalating housing costs” that are pushing people farther away from the downtown core, says Kevin Desmond, president and chief executive officer of Vancouver-area transit agency TransLink. The agency operates the nearly 50-mile fully automated SkyTrain system, along with the West Coast Express commuter-rail system and more than 200 bus routes.

With mounting housing costs and increasing roadway congestion in mind, local elected officials and TransLink leaders have teamed up to create a wide-ranging regional transit expansion plan, which calls for significantly boosting SkyTrain service, along with building new subway and light-rail lines. Hailed by agency officials as metro Vancouver’s biggest transportation expansion in history, the multibillion-dollar “10-Year Vision” is initially being rolled out in two phases. The first CA$2 billion phase was adopted in November 2016, while the CA$7.3 billion second phase was adopted in June.

“Improving and expanding the transit system — whether it’s just adding more service or expanding our fixed-rail system — is absolutely vital to the long-range future of the region,” Desmond says.

The first and second phases of the TransLink plan are being funded through a mix of federal, provincial and agency dollars. For the first phase, the Canadian government ponied up CA$370 million, while British Columbia provided CA$246 million. The remaining CA$1.3 billion was covered by TransLink’s existing funds, as well as property tax and fare increases. 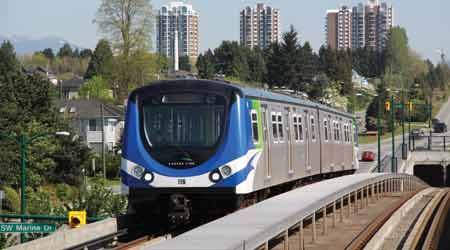 The first phase of TransLink’s vision included an 11 percent boost in peak-hour passenger capacity along the SkyTrain’s Canada Line.
TransLink

In late June, TransLink’s board and the Vancouver-area Mayors’ Council on Regional Transportation finalized funding agreements for the plan’s second phase, which will include a 1.5-cent hike on fuel taxes to pay for the projects. The British Columbia government pledged to cover 40 percent of the phase’s capital costs.

There are plans for a third phase, although funding and other details haven’t been worked out yet.

The first phase included an 11 percent boost in peak-hour passenger capacity along the SkyTrain’s Canada Line. TransLink also extended peak-hour service along the Expo and Millennium SkyTrain lines to reduce wait times and provide more travel options during the busiest periods of the day.

Nearly half of the funds in Phase Two will go toward two major rail projects: the Broadway subway extension of the SkyTrain system and construction of the new Surrey light-rail line.

The CA$2.83 billion Broadway subway project will, in part, replace TransLink’s existing 99 B-Line bus rapid transit route, which agency officials say is the most heavily used bus corridor in North America. In 2016, the 99 B-Line served about 55,700 passengers each weekday.

The project corridor also is the second-densest employment area in the region outside of downtown Vancouver.

“We can’t put any more buses on the corridor. It’s completely saturated with 60-foot articulated buses that are jam-packed,” Desmond says. “That [rail] corridor is very strongly justified just by demand.”

The 3.5-mile, six-station subway line will extend the SkyTrain’s Millennium Line from the existing VCC-Clark Station in Vancouver to a new stop at Arbutus Street. The line will travel on a nearly half-mile elevated guideway after the VCC-Clark stop and then transition to a below-grade route under Broadway for about 3 miles.

Over time, a “considerable” number of developments are expected to sprout up along the Broadway corridor over time, Desmond says.

TransLink’s other major rail project in the second phase is the CA$1.65 billion Surrey light-rail project, which calls for building 16.7 miles of light rail in the metro Vancouver area. The line initially would connect points in Surrey, British Columbia, then eventually be extended to Langley, British Columbia.

Light rail was selected to “rethink and redevelop the way Surrey works in terms of its transportation network, and in terms of land use,” Desmond says. The corridor now is an often-congested arterial road, with many commercial developments but not much in the way of housing.

“Light rail is intended to spark a different type of development going forward,” Desmond says. “The vision is to create walkable, sustainable, livable communities along the light rail.”

Additionally, the current road is particularly prone to congestion during peak hours, but the Surrey line is expected to relieve some of that — not to mention reduce travel times for locals.

While planning the Surrey project, TransLink officials visited other North American cities with light-rail systems, including Phoenix and Minneapolis. They also toured agencies in Ontario, where light-rail lines are being built in Toronto and Ottawa.

“We collect information from all over the world,” Desmond says.

There are no light-rail systems in greater Vancouver, so the Surrey project will be breaking new ground for the region. And in many ways, Desmond is the man for that job.

Former TransLink Chairman Don Rose cited his experience in introducing light-rail service among the reasons for naming Desmond CEO in early 2016. Before joining TransLink, Desmond served as general manager of King County Metro Transit in the Seattle area, where he worked for 12 years.

“[Desmond’s] emphasis on collaboration with customers and local stakeholders will be invaluable as we move forward,” Rose said in a statement at the time.

During Desmond’s tenure at the agency, King County Metro launched light-rail and streetcar service, which it continues to operate under contract from Sound Transit.

“I was in Seattle when the first phase of light rail was being built, so I was very much on the ground,” Desmond adds.

Alongside the two new rail lines, TransLink plans to spend CA$1.2 billion to upgrade its existing SkyTrain Expo and Millennium lines. That includes buying new units to replace original SkyTrain cars that are now more than three decades old. The agency’s new rail-car order also will include some extra units to increase the SkyTrain fleet.

Coupled with other infrastructure upgrades along the SkyTrain system, the new cars will enable TransLink to boost capacity by 60 percent, Desmond says.

The agency has ordered 56 new SkyTrain cars from Bombardier, along with 24 vehicles for the Canada Line from South Korean rail-car manufacturer Hyundai Rotem.

The second phase of the 10-year plan provides additional funding to purchase more than 150 additional cars.

In the meantime, TransLink officials are working to keep locals up to date on the 10-year plan’s progress and projects. For the past few years, the agency has pushed a public outreach plan that includes in-person workshops, soliciting feedback online and other strategies.

“We’ve been out in the public already quite a bit,” Desmond says.

Once TransLink starts putting shovels in the ground, however, the agency plans to step up its communication with the public even more, he adds. The agency aims to begin construction on the Surrey light-rail project in early 2020, with construction on the Broadway subway slated to start in the same year.

While the Broadway subway extension work will mostly take place underground, the Surrey light-rail project could have some tangible effects on local traffic patterns during construction — something that Desmond remains concerned about.

“We’ve got to have a very strong partnership with the city of Surrey, which we do.” he says. “We’re looking at this from the community relations side, [utilizing] a partnership approach through the launch of service.”

Maintaining strong community relations and partnerships will be key to delivering all the projects in the 10-year plan. The agency also is hoping the construction industry will have the capacity to handle the wide-ranging projects, Desmond says.

“We’re no different than any major metro region that is growing and dealing with traffic congestion,” he says. “We need high-capacity transit to manage that.”