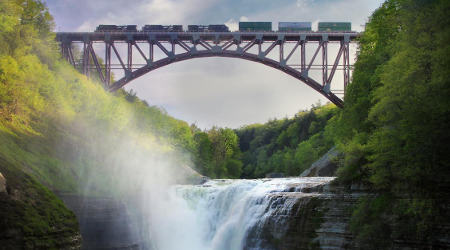 Built under a public-private partnership, the $75 million bridge expands freight-rail capacity and economic opportunities for businesses and communities across the Southern Tier and Finger Lakes, NS officials said in a press release.

The single-track arch structure replaces a 19th century bridge that restricted train speeds and rail-car weights, and had become a major transportation bottleneck.

At yesterday's ceremony, NS Chairman, President and Chief Executive Officer James Squires announced that the bridge, which spans the 235-foot-deep Genesee River Gorge, has been named the Genesee Arch Bridge. The name received the most votes during a bridge-naming campaign on social media.

"The successful partnership we are here to celebrate demonstrates that big things can be accomplished when the private sector and the public sector work together to achieve common goals," Squires said during the ceremony.

Located between Buffalo and Binghamton on the railroad's Southern Tier Line, the 963-foot-long bridge connects New York businesses to markets in the Midwest and New England, trade with Canada and access to New York City. After two years of construction, NS began operating trains in December 2017 over the new span, built 75 feet south of the former bridge.