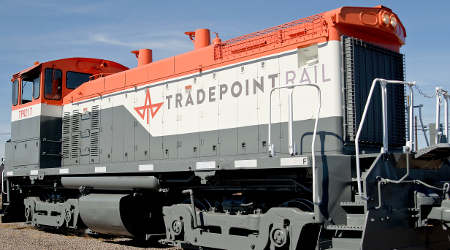 Tradepoint Atlantic had a few major announcements to share earlier this month regarding the firm’s ongoing efforts to develop a 3,100-acre logistics center on a former steel mill site near the Port of Baltimore.

On April 6, company officials said they signed a 10-year contract with Host Terminals to oversee marine cargo operations, landed a collective bargaining agreement with the International Union of Operating Engineers’ Local 37 covering bulk and breakbulk cargo workers, and had $30 million available for infrastructure improvements at the site.

The news bodes well for a mission Tradepoint Atlantic began in 2014: to combine access to Class Is, deepwater berths, interstate highways, warehouses and distribution centers to establish the nation’s largest intermodal redevelopment complex. More than 40 percent of the U.S. population and more than half of Canada’s population live within a day’s drive of the site.

The logistics center would encompass an area that at one time housed plants operated by the Pennsylvania Steel and Bethlehem Steel companies dating back to 1889, but had gone dormant in 2012. It also would be the first center of its kind in the United States to bring bulk cargo operations inland, Tradepoint Atlantic officials claim.

It might take them as long as a decade to fully develop the center, but Tradepoint Atlantic leaders are counting on the rail aspect of their plan to play a major role. In November 2016, the company formed and branded Tradepoint Rail, a short line that manages and operates more than 100 miles of track at the logistics center, and interchanges with CSX and Norfolk Southern Railway. The railroad evolved from two former short lines that operated at the site for nearly a century: the Patapsco and Back Rivers Railroad, and the Baltimore Industrial Railroad. 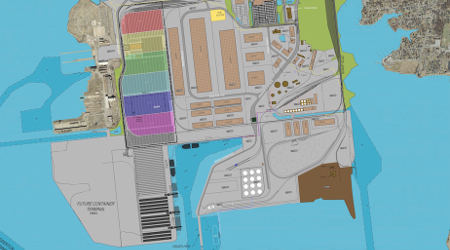 “We see this as a multimodal global logistics park, and rail is a huge asset there,” says Tradepoint Atlantic Vice President of Corporate Affairs Aaron Tomarchio. “We are marketing that upfront. There is a uniqueness about the property.”

The marketing efforts include employing a full-time salesperson for the short line and launching its own website. The company expects to boot up the site (www.tradepointrail.com) very soon, says Tomarchio.

“The tag line is: The rail line to the world,” he says.

Thomas has more than 10 years of experience in transportation sales, analytics and operations. Prior to joining Tradepoint Atlantic, he served CSX as manager of business development, international sales and ports. Thomas held various other positions at the Class I, as well, including trainmaster.

Tradepoint Rail needs to function as a vital piece of the Tradepoint Atlantic team, says Thomas. To help make that happen, the short line aims to provide a number of services in addition to transportation, such as transloading and rail-car cleaning, repair and storage.

“We want to offer logistics help to our customers,” says Thomas. “That way, they don’t have to go to two or three locations for different services, and can save on their logistics planning.”

Tradepoint Atlantic so far has spent more than $1 million upgrading the short line, with more to come; the company employs a full-time trackwork crew. As of late March, 25,000 feet of track had been built and another 22,000 feet was brought back into service, says Thomas.

“That’s almost nine miles,” he says. “We can build track to a tenant’s rail requirements. We have in-house engineering, layout and contracting [capabilities].” 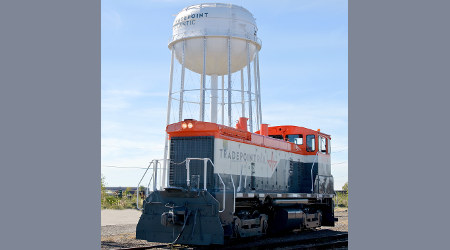 “We have a fairly good mix,” says Thomas.

In the future, the short line could help Tradepoint Atlantic attract shippers of grains, propanes, steel panels and other bulk products, he believes. Some other traffic might be generated by on-dock rail and lay-down facilities the short line plans to establish at the port.

Currently, the port has four berths with depths from 36 feet to 41 feet, and plans are in the works to deepen the berths from 40 feet to 50 feet. In addition, a 1,120-foot pier with a depth of 42 feet is in place to help accommodate bulk commodities.

Tradepoint Rail also figures to gain volumes as Tradepoint Atlantic continues to develop facilities at the logistics center. There’s enough room to build distribution centers, warehouses or other facilities totaling 15 million square feet. The company already has lined up such tenants as Under Armour, Harley-Davidson and FedEx, which expects to open a 300,000-square-foot distribution center in August.

If Tradepoint Atlantic develops the center as planned by 2025, the state of Maryland and greater region would benefit from an annual economic impact reaching $3 billion and new jobs totaling 17,000, according to company estimates.