Note: This sidebar in the December issue was written prior to NS' rejection of CP's initital buyout offer, CP's second offer, NS' subsequent rebuff of that proposal and several other maneuvers. Follow this link to read the latest on the proposed CP-NS merger.

Norfolk Southern Corp. and Canadian Pacific were business partners that executed the D&H line sale, and now they might become permanent partners.

CP on Nov. 17 publicly announced what had been rumored for more than a week: it presented a buyout offer to NS that would result in a merger of the fourth- and sixth-largest North American Class Is.

On Nov. 9, CP Chief Executive Officer E. Hunter Harrison sent a letter to NS Chairman, President and CEO James Squires proposing the buyout via a 50/50 cash and stock transaction. For each share, an NS stockholder would receive $46.72 in cash and 0.35 shares of a new company that would own both Class Is. The more than $28 billion deal would be the largest-ever acquisition in the United States for a Canadian company, according to Reuters. 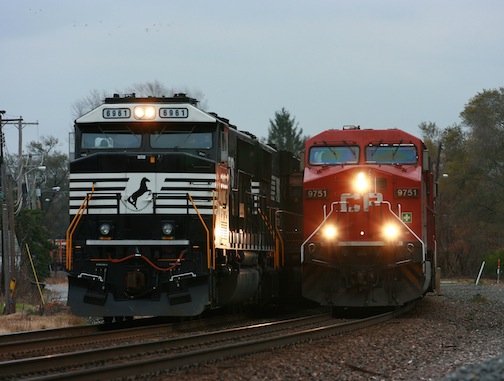 The combination would form an integrated transcontinental railroad with the scale and reach to deliver “unsurpassed levels of safety and service,” while also increasing competition and creating significant shareholder value, Harrison wrote. “A combined network will lead to faster growth for the new entity versus what either of us would be able to achieve on our own and, importantly, would create a larger, more diversified book of business less dependent on volatile commodities, such as crude oil or thermal coal,” he stated.

“[The] board of directors, in consultation with its financial and legal advisors, will carefully evaluate and consider this indication of interest in the context of [the company’s] strategic plans, and an ongoing review of opportunities to enhance stockholder value through strategic, financial and operational measures,” NS officials said in a prepared statement. “Notably, any consolidation among Class I railroads in North America would face significant regulatory hurdles.”

The Surface Transportation Board (STB) might take at least 18 months to scrutinize a CP-NS merger, according to the Wall Street Journal. But Harrison believes the proposed transaction ultimately would pass regulatory muster in both the United States and Canada because the two Class Is could prove the consolidation addresses various rail capacity and shipper issues.

CP’s proposal calls for the merged railroad to take a new approach to terminal access. In the event the railroad failed to provide adequate service or competitive rates, it would allow another carrier to operate from a connection point over its tracks and into its terminals. The merged railroad also would allow shippers to choose where they connect with another railroad on its lines, helping to channel traffic away from Chicago and boost capacity without adding infrastructure, Harrison believes.

“As our combined network creates more comprehensive end-to-end shipment solutions for our customers while reducing congestion in key corridors such as Chicago, network capacity will expand, allowing us to improve service and lower costs — which is both pro-shipper and pro-competition,” he wrote to Squires.

Although CSX Corp. rebuffed his buyout attempt last year, Harrison has the credibility with past deals — such as the CN/Illinois Central Railroad (IC) combo — and the well-respected operational knowledge to put the STB’s more stringent merger rules to the test, Hartford believes. For example, he championed “precision” railroading concepts at CN after instituting “scheduled” railroading principles at IC.

“Hunter’s the guy to do it,” says Hartford.