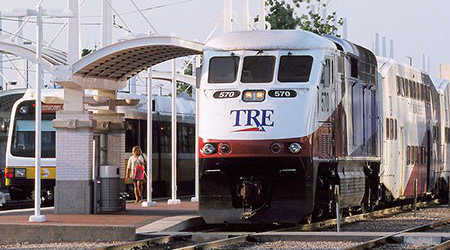 The Trinity Railway Express (TRE) over the weekend will replace a rail bridge over Bear Creek in Irving, Texas.

The replacement marks a major step in TRE's ongoing double-track upgrade, according to a press release issued by Dallas Area Rapid Transit, which jointly owns TRE with the Fort Worth Transportation Authority.

Meanwhile, MTA Metro-North Railroad next week will kick off comprehensive improvements on the Port Jervis Line.

The project, which will continue through May 4, includes replacing timbers on the Pond Brook Bridge south of Sloatsburg, New York, as well as renewing ties.

Crews also will inspect and reinforce rock slopes adjacent to the tracks between the Port Jervis and Ramsey Route 17 stations. The work is aimed at ensuring the slopes are free of any loose rocks and brush that could fall on the tracks and cause delays, Metro-North officials said in a press release.