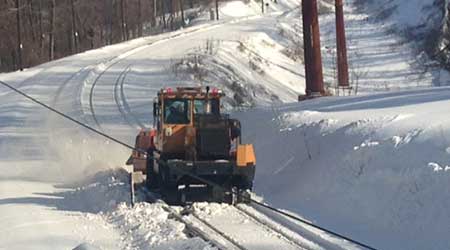 Since harsh winter weather can significantly hinder its operations, the Southeastern Pennsylvania Transportation Authority (SEPTA) recently acquired new equipment that in part can be used to plow snow.

The agency obtained a rail maintenance vehicle — which also is known as a utility track vehicle — and a cab flat car. The flexible equipment can be used as a work train prime mover in non-winter seasons to deliver or pick up materials for maintenance projects, replace rail and ties or tow rail vehicles, and in winter to plow snow.

The machinery will be useful on the Norristown High Speed Line, which is especially susceptible to drifting snow due to the locations of track along the route, SEPTA officials said in a press release. Snow accumulations of 8 inches or more impede trains and can cover the tracks and third rail, forcing the agency at times to suspend service, they said.

"In my 30-year career at the authority, there have been several storms that have forced us to shut down the Norristown line for days at a time," said SEPTA General Manager Jeffrey Knueppel. "We've had a need for equipment that will remove snow quickly and efficiently so that we can resume service as soon as possible."

The agency also uses high-velocity snow blowers and brining equipment during winter to deal with storms.

To learn how 11 rail suppliers are trying to help railroads keep Old Man Winter at bay by offering a variety of new-and-improved equipment, read this article from Progressive Railroading's February issue.