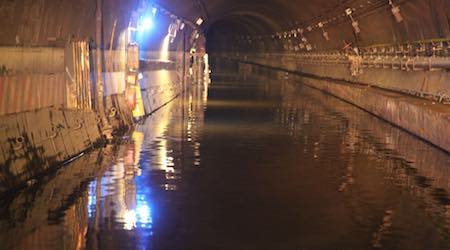 The 1.2-mile tunnel was one of nine NYCT subway tunnels flooded and damaged by the storm in October 2012. More than 500,000 gallons of corrosive saltwater filled the tunnel, damaging tracks, signals, pumping equipment and electrical and switching equipment.

Although temporary repairs immediately after the storm enabled the agency to resume service, the Clark Street Tube requires "extensive reconstruction" to ensure that the 2 and 3 line operations remain safe and viable, NYCT officials said in a press release.

The work will be completed over 56 weekends and won't affect regular weekday daytime service. The tunnel carries the 2 and 3 line trains between Manhattan and Brooklyn underneath the East River.

"The Clark Street [Tunnel] project is the next phase in what is the most extensive reconstruction and fortification effort in the history of the New York City subway system," said NYCT President Ronnie Hakim. "This effort is well underway and we continue to face the challenge of performing these vital tasks as quickly and effectively as possible while minimizing the impact on our customers' commutes."