NYCT wraps up first phases of flood protection in Queens 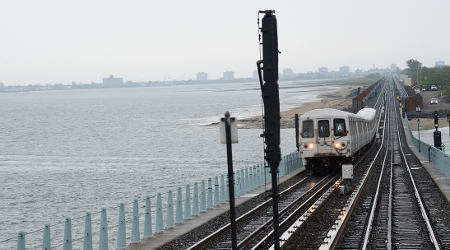 The building, which is slated to be completed during the project's final phase, will include an emergency generator. All the upgrades are aimed at preventing flooding caused by hurricanes.

Due to its location, the Rockaway Peninsula is vulnerable to flooding and storm surge, which was particularly evident during Hurricane Sandy in October 2012, NYCT officials said in a news release. While the power station and electrical infrastructure in a Rockaways facility were largely unharmed during the storm, the event underscored the need for further protection during future events.

"We are committed to delivering the best service possible, which includes planning ahead for a future in which storms are getting more severe and sea levels are continuing to rise," said NYCT President Andy Byford. "The proactive flood protections we are putting in place in the Rockaways help us ensure subway service can continue to run safely."

During the project's final phase — slated to begin this fall and end in spring 2019 —crews will complete construction of the compressor building, install four flood gates and bring the site up to grade, agency officials said.