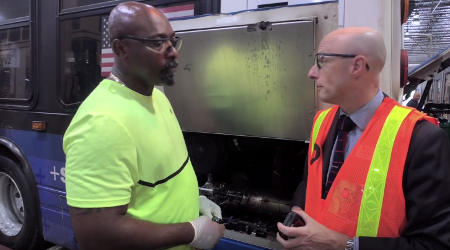 Unveiled in May, the plan calls for updating the subway system's signals and track infrastructure to improve performance. Within five years, the agency aims to install communications-based train control on five additional rail lines. And within the 10 years, that control system would be implemented on 11 more lines.

"My job now is to go out and get the funding we know we need in order to transform this subway, to make the subway accessible, to transform our bus network," Byford said in the video, which was addressed to MTA employees.

In the short term, NYCT faces challenges in balancing its operating budget. As a result, the agency will minimize discretionary spending and leave nonessential jobs unfilled, Byford said.

The agency has no plans to eliminate existing jobs or services, Byford noted.