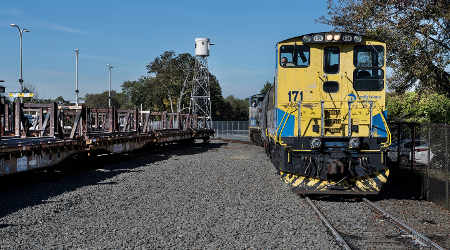 When falling leaves land on running rails, they can get run over by trains and become crushed into a gelatinous, slime-like substance. This "leaf slime" reduces the amount of adhesion train wheels have on the rails, which prevents trains from stopping normally when engineers apply the brakes.

"Anyone who has ever driven a car and tried to brake on a patch of ice knows something of what it feels like for a train engineer who applies the brakes to a train on a patch of rails coated in liquefied leaf residue," said MTA Chairman Joseph Lhota in a press release. "As autumn begins we turn our attention to fighting leaves that have fallen on our tracks, but throughout the year we work to combat vegetation along the rails."

Earlier this month, New Jersey Transit announced that it has begun employing similar high-pressure machines to clear fallen leaves and oily residue on its tracks.

In addition to spraying away the fallen leaves, LIRR applies a mixture known as "sandite," a traction gel designed to improve traction.

The railroad's schedule went into effect yesterday and will continue through early December. During that period, trains between Philadelphia and Lindenwold, New Jersey, will run at slightly reduced speeds.

The accumulation of leaf slime can cause PATCO trains to take longer to accelerate and decelerate. The fallen leaves also can cause wheels to slide. The resulting friction can flatten parts of wheel surfaces, causing trains to roll unevenly, PATCO officials said in a press release.

To combat the fallen leaves, PATCO also will use a high-pressure washer to clean the rails during midday hours. However, that work can lead to brief train delays.

"The loss of friction created by leaf residue can require that we take affected trains out of service for repairs, which can result in temporary equipment shortages, and can also lengthen the running times because of slower acceleration and the need for more gentle braking," said PATCO General Manager John Rink.