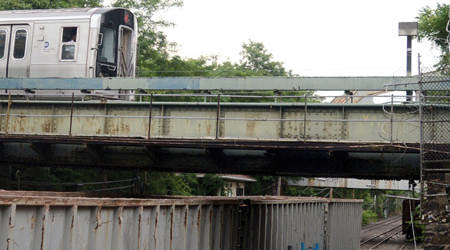 The Metropolitan Transportation Authority (MTA) on July 1 will begin a $163 million project to rebuild and improve century-old sections of the M rail line.

Contractors will demolish and rebuild a crucial segment of the line between the Fresh Pond Road and Middle Village-Metropolitan Avenue stations in Queens, New York. The segment includes a 100-year-old metal bridge that crosses over the New York & Atlantic Railway's tracks.

The overpass carries M trains to the line's Queens terminus and provides access to subway car storage yards. To ensure reliable service, the structure needs to be replaced, MTA officials said in a press release.

The project will continue through Sept. 1.

In addition, preliminary work will begin to replace the Myrtle Viaduct, a century-old concrete overpass between the Myrtle Avenue and Central Avenue stations in Brooklyn.

The improved M Line is expected to provide alternative service during the upcoming repairs to the L line's Canarsie Tunnel, which suffered extensive damage during Hurricane Sandy in 2012. That work is slated to begin in 2019.

On an average weekday, M trains serve 60,000 riders between the Myrtle Avenue and Middle Village-Metropolitan Avenue stations. Since 2000, ridership at the seven stations along that branch has grown 53 percent.