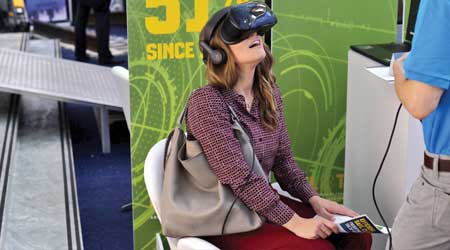 Two months after rail industry lobbyists descended upon Washington, D.C., for their annual Railroad Day on Capitol Hill, the Association of American Railroads (AAR) in May convened its first-ever RailxTech exhibition in the U.S. capital.

Held May 15 in the U.S. House of Representatives’ Rayburn House Office Building, the event featured Class Is’ demonstrations of cutting-edge technologies, including virtual reality glasses, drones and smart sensors. The RailxTech exhibition, which attracted more than 320 attendees, coincided with the sixth annual Infrastructure Week.

Our #VR simulators provide environmental controls such as weather conditions, time of day and length of trains so our crews are prepared for whatever lies ahead. #RailTech #PositiveTrainControl pic.twitter.com/v8fTU0TW9T

“From virtual reality to simulators and one-on-one conversations with the people delivering the future of freight rail, RailxTech showed how we put technology to work every day,” AAR officials said in a statement issued after the event.

“Advancements like these help strengthen rail infrastructure and the economy,” CSX officials said in a tweet about their exhibit.

Meanwhile, BNSF representatives manned a booth to provide details on the railroad’s use of unmanned aerial vehicles, more commonly known as drones. The Class I is exploring the vehicles to augment its inspection protocols.

BNSF leaders believe drones are another way that emerging technologies can be deployed to boost safety.