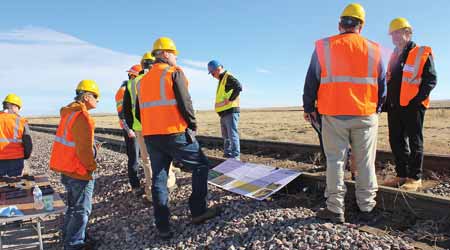 In late March, a host of railroaders and suppliers gathered in Colorado for the Association of American Railroads’ (AAR) 23rd annual research review.

The event kicked off March 27 with presentations at the Cheyenne Mountain Resort in Colorado Springs. The next day, attendees headed out to the Transportation Technology Center Inc.’s (TTCI) facility in Pueblo for the annual track walk to witness some of the latest research in action.

While specific findings discussed at the event won’t be made public for several months, TTCI President Lisa Stabler last month shared her thoughts on some of the review’s highlights, along with her goals for the center’s future research efforts. For instance, TTCI aims to gain a fuller understanding of the wheel-rail interface and predictive analytics applications, she said.

Stabler believes the research review demonstrated TTCI’s continued focus on improving freight railroads’ “safety, reliability and efficiency” — a phrase she emphasized several times during a phone interview. But the phrase isn’t just lip service: The technology being tested and refined at TTCI is having tangible effects on those aspects of freight-rail operations.

“The research we do by itself has no meaning unless it’s implemented in revenue service,” Stabler said.

“It’s an extension of the work that we did some number of years ago,” Stabler added. “They’re taking that research and moving it forward.”

The detector is one of the few products that TTCI employees have designed; typically, center officials work with suppliers to help refine their product designs.

“We were happy to see that there were projects that we had involvement with, as well as the projects that Union Pacific has evolved from the ground up,” Stabler said of Fritz’s speech.

The review also provided a firsthand look into how railroads are moving the needle on safety through their “strategic implementation of technology,” said Gary Fry, TTCI’s assistant vice president of research and development.

The 2018 iteration attracted 475 attendees, including “a lot of repeat customers,” Fry said. Attendees included representatives from all Class Is, as well as staff members from short lines, suppliers, academia, government agencies and other rail industry constituents. The registrants hailed from 13 countries and more than 150 organizations.

“We’re always pleased with the turnout,” Fry said. “What we really like is the quality of the engagement and the participation of attendees.”

This year’s review marked the last for former TTCI Senior Vice President of Research and Development Semih Kalay, who led the program for more than two decades and retired after the event. Fry now leads the program.

Although the review didn’t include any positive train control (PTC) projects, that technology is on TTCI’s 2018 strategic research plan. Each year, the center’s member railroads provide funds to tackle a range of research projects. Stabler declined to mention the exact amount of funding TTCI receives, but noted it’s a “substantial amount.”

“The reality is Class Is fund us because they want us to solve the problems that are causing them not to be as safe, reliable or efficient as they desire,” she said. “That’s the reason we’re here.”

Over the past four years, railroads have invested $100 billion on technology, equipment and infrastructure, according to a recent white paper released by the AAR.

“The past three years have been the safest in the history of America’s freight-rail system,” Fry added.

To maintain that level of safety, TTCI continues to explore several research areas. A primary focus: the design of rolling stock, track and track structures.

“All of those things are very transparent to the non-railroad public,” Stabler said. “But there are a lot of things that happen within our industry that really aren’t visible to the public but provide great benefit to the industry.”

“It allows us to use that inspection technology in ways that we have never thought of before,” Stabler said.

For example, advances in predictive analytics are enabling rail researchers to combine different sets of data to identify issues that could cause problems if left unchecked.

In Stabler’s view, leveraging railroads’ growing collection of track and locomotive data will continue to be a key focus area.

“Big Data is here to stay,” she says. “It is a tool which we will continue to utilize in the future to the full extent we can.”

When it comes to automation, railroads have been deploying such technologies for a long time, Stabler said, citing PTC as a newer form of it.

Shortly after the review, the Federal Railroad Administration appeared to do just that. On March 29, the agency published a solicitation for comments on the future of automation in the rail industry — a call that netted more than 2,100 responses.

With all those ideas circulating about, TTCI employees likely will have their work cut out for them over the next few years. And even outside of the automation realm, the center’s mission is far from complete. 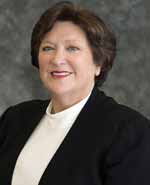 “With an industry that’s over 150 years old, you would think everything is known, but there’s a lot to learn, especially about the wheel-rail interface,” Stabler said. “It’s a very interesting thing for a researcher to understand all of the complex things that happen in that very, very small space. We know about a lot of them, but we don’t know 100 percent of them. We’re not going to be happy until we’re there.”