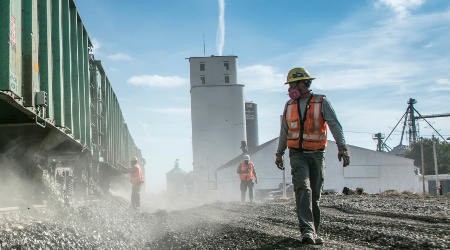 After perusing the submitted surveys and other available information that helped me assemble this year’s spending report, a few things stand out about the referenced maintenance-of-way (MOW) programs.

Many budgets appear to be fairly flat again, as has been the case the past few years. Thirty of the 61 Class Is, short lines, regionals and passenger railroads that provided 2017 budgets in MOW surveys collected in February and March (from among more than 200 distributed surveys) or during presentations have increased spending while nine others have slotted the same amount compared with 2016 levels. Yet, half of the year-over-year increases are very slight, barely or not quite covering higher labor and material costs associated with inflation.

Conversely, 23 others trimmed their budgets — some substantially — and a dozen or so cited funding challenges. For example, the Los Angeles County Metropolitan Transportation Authority cut its spending by one-third year over year (to $44.4 million) because of budget constraints.

Overall, there are fewer program breakdowns in the 2017 report, down to 65 total (see note below) from 72 and 75 in the 2016 and 2015 reports, respectively. Similar to the murky political climate, MOW appeared to be a “don’t go there” topic for a number of railroads — including some that have often participated in past surveys — perhaps given economic or traffic-growth concerns.

Among those that did respond, a few mentioned delaying certain work or curtailing program aspects in 2017. One was Norfolk Southern Railway, which opted to reduce the amount of work equipment it acquires.

Nonetheless, there still will be a lot of equipment in play and a lot of greenbacks invested this year in MOW. On the freight side, U.S. railroads are projected to spend $22 billion — or about $60 million per day — to maintain their networks, according to the Association of American Railroads. That includes the nearly $9 billion budgeted by Class Is and small roads in the report.

In terms of passenger rail, the report lists 21 MOW budgets totaling more than $3 billion, a portion of the nearly $90 billion that the American Public Transportation Association estimates U.S. transit systems need to reach a state of good repair.

As they chip away at their MOW programs, railroad managers expect to face many of the same challenges of previous years, such as scrounging up the necessary funds or finding available track time. For the Chicago Transit Authority (CTA), dealing with aging infrastructure and limited resources is a constant uphill battle.

“[Our] unmet capital need is approximately $13 billion and there hasn’t been a state capital bill since 2009, [so] finding funding for critical projects is a challenge,” CTA officials wrote in their survey.

Following are the MOW slates for 65 freight and passenger railroads, which figure to keep seeking ways to overcome hurdles while carrying out this year’s programs.

Editor's Note: The passenger railroad section of the 2017 MOW Spending Report includes a program breakdown from the San Francsico Municipal Transportation Agency that wasn't included in the report's print edition.