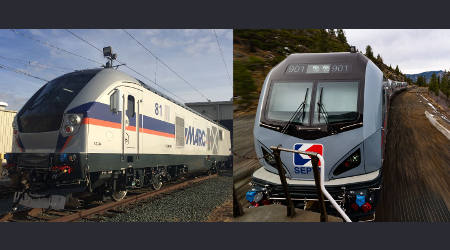 The MTA has received three Charger locomotives for its Maryland Area Regional Commuter (MARC) service. The MTA has ordered a total of eight of the diesel-electric locomotives.

Powered by a 4,400 horsepower Cummins engine, the Charger can operate at speeds up to 125 mph. The units are in operation on California's Capitol Corridor and San Joaquin routes, as well as on other routes in Illinois, Iowa, Michigan, Missouri, Oregon, Washington and Wisconsin.

In Pennsylvania, Siemens delivered the first of 15 ACS-64 electric locomotives to SEPTA. The technology is similar to the locomotives operating on Amtrak's Northeast and Keystone corridors.

SEPTA is using the new locomotives to replace an aging fleet as it works to expand capacity and provide more efficient service, Siemens officials said in a news release.

"As the locomotives are delivered this holiday season, I look forward to seeing them go into service in 2018," said Armin Kick, head of locomotives at Siemens Rolling Stock. "The benefits that they will bring to passengers in Baltimore and Philadelphia are certainly something to look forward to in the New Year."