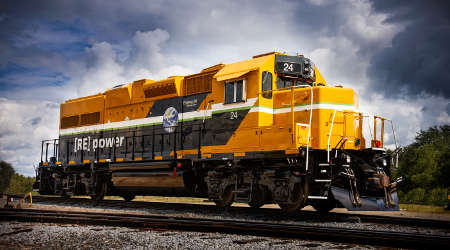 Progress Rail has completed initial emissions testing of its new repower locomotive — the EMD24B — and has begun the process to certify the unit per the U.S. Environmental Protection Agency's (EPA) Tier 4 emissions standard, the company announced this week.

The EMD24B comes equipped with a Cat® 3512C HD engine and after-treatment technologies that have been proven to lower emissions, Progress Rail officials said in a press release.

The partnership with PHL is the second time the company and railroad have partnered on an emissions testing project, officials said.

"In 2010, PHL took part in one of our largest repower projects to date by modernizing an existing locomotive fleet with cleaner burning engines. Today, we're pleased to continue that legacy of collaborating for cleaner air, through our latest testing efforts for our Tier 4 ready switcher locomotive," said Progress Rail Chief Executive Officer and Caterpillar Senior Vice President Billy Ainsworth.

PHL is eager to participate in the testing of the locomotive, as it is consistent with the railroad's "ongoing effort to achieve the lowest possible emissions within the ports of Los Angeles and Long Beach," said PHL President Otis Cliatt II.