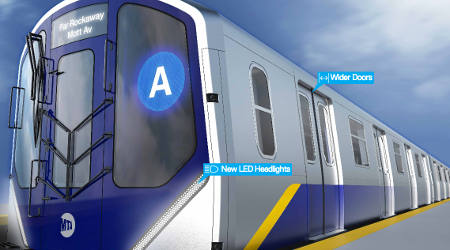 Riders may tour the new R211 car design and its features today through Dec. 6 at the the 34th Street-Hudson Yards Station in Manhattan. At the open house sessions today, tomorrow and Saturday, agency staff will gather passengers' feedback, NYCT officials said in a press release.

The new units feature 58-inch door spans that are wider than standard doors on existing cars. The wider doors are aimed at speeding the boarding process and reducing the time trains sit in stations.

The R211 cars also will feature new grab rails, brighter lighting and digital displays that provide real-time information. Some of the new units will feature an accordion-like "open gangway" design between cars, which will enable riders to move freely between cars to help reduce crowding.

Delivery of new cars for testing is expected to start in 2020. The units will operate on the subway's B Division, which includes the lettered routes and the Staten Island Railway.

Feedback gathered at the open house sessions will be shared with the cars' designers and NYCT's car equipment division.

"Developing a first-in-class subway car is an essential part of modernizing our subway system," said MTA Chairman Joseph Lhota. "It is important that our subway customers provide their feedback in this process and we hope they will do so after visiting the prototype."