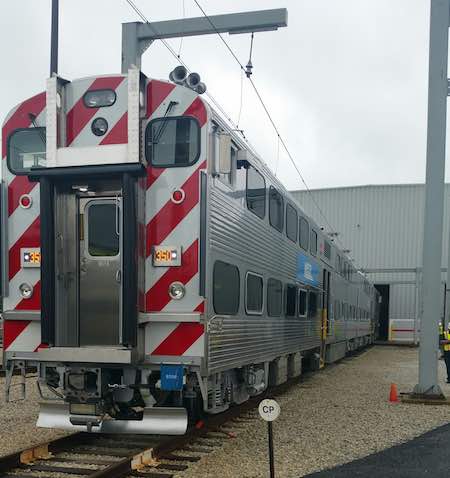 The units' new features include larger windows, seats with reversible seatbacks, brighter lighting, non-skid floors and an improved public address system. The cars also have power outlets for customer use.

Half of the new Highliner have bathrooms, which means that every train on the Metra Electric Line will have at least one bathroom.

The cars were delivered as part of a $585 million contract with Sumitomo Corp. of America/Nippon Sharyo. The order spurred Nippon Sharyo to invest $35 million to build a rail-car factory in Rochelle, Ill., Metra officials said in a press release.

Highliners are electric, self-propelled cars unique to the Electric Line. They are propelled by alternating current, which supplies more power and requires less maintenance than the direct current propulsion used by the original Highliners, agency officials said.

Although the Eletric Line cars can't be used on diesel lines, Metra has designed the cars so that, where possible, they share parts with those used on diesel bilevel cars.

"Modernizing the Electric District’s fleet has been a priority for Metra for more than a decade," said Executive Director and Chief Executive Officer Don Orseno. "With the delivery of the final cars, we are celebrating the completion of a major investment that has enabled us to provide our customers with more comfortable and reliable service."

Since 1984, Metra has invested $1.6 billion in the Electric Line — the greatest investment on any of Metra's lines in the agency's six-county service area.
The push to replace the original more than 40-year-old Highliners began with a 2004 order for 26 stainless steel cars. Delivered to Metra in 2006, these cars were purchased with $76 million through an Illinois state bond program.

Another state bond program allowed Metra to move forward with the purchase of 160 more Highliners in 2010.

Meanwhile, BNSF Railway Co. has begun a project to replace more than 10,000 ties along a 23-mile stretch of track used by the Class I and Metra.

The project calls for replacing worn ties between Roosevelt Road in Chicago and Lisle, Ill. On Aug. 27, Metra began a modified schedule for service on the BNSF Railway Line. The schedule will remain in effect until Sept. 16.

The $1.5 million project is part of Metra's 2016 construction program, which includes about $200 million worth of infrastructure improvements.