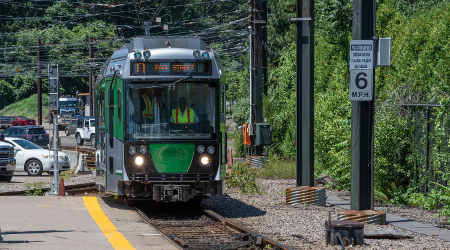 Starting in September, the new cars will be put into service incrementally on the Massachusetts Bay Transportation Authority's (MBTA) Green Line light-rail route. All 24 new cars are expected to be in service next year.

The cars will have a 10 percent increase in capacity compared with existing cars operating on the line. The new units' sliding doors are designed to improve boarding and exiting.

Safety enhancements include the first crash energy management structural design to be installed on a U.S. light-rail vehicle, MBTA officials said in a press release.

The MBTA needed the new units to maintain the Green Line's current headways between cars once the line's extension is completed in 2022, agency officials said. The MBTA broke ground on that project in late June.