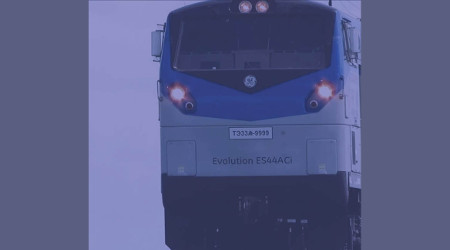 The agreement also calls for additional locomotive kits over 10 years, the rehabilitation of locomotives in the railway's legacy fleet and long-term maintenance services.

The agreement is GE's largest in Ukraine, and marks the nation's efforts to modernize its transportation infrastructure and strengthen its position as a key European rail hub and trade corridor, GE officials said in a press release.

"After many years of inactivity, this project will launch a large-scale modernization of Ukrainian Railway's locomotive fleet," said Yevgen Kravtsov, acting chairman of Ukrainian Railways. "In addition to addressing Ukraine's needs for greater capacity, this strategic partnership with GE will also provide a powerful impetus to further develop domestic manufacturing."

Locomotive production is expected to begin in the United States early this year, with the first deliveries slated for this fall. Certain work will occur in Ukraine.

The announcement marks the next chapter in GE's 80-year history of working with Ukraine, they added.

"This deal demonstrates our expanding global customer base and is a promising step forward in our relationship with Ukrainian Railways, which can serve as a catalyst in attracting international financing and accelerating economic growth in Ukraine," said GE Transportation President and Chief Executive Officer Rafael Santana.