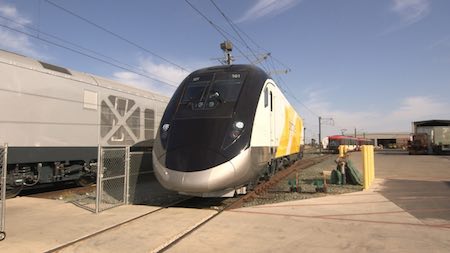 The unit moved along a quarter-mile track at the Siemens manufacturing facility in Sacramento, Calif., Brightline officials said in a press release.

"Brightline will be the only passenger rail service in the country to have such dynamic and modern trains that will offer Americans a new and modern experience in train travel," Skoropowski added.

Brightline is being developed by All Aboard Florida, a wholly owned subsidiary of Florida East Coast Industries LLC. Expected to begin service in 2017, Brightline will operate between Miami, Ft. Lauderdale, West Palm Beach and Orlando, Fla.

The static and dynamic testing of the locomotive was completed over a three-week period, Brightline officials said.

Brightline's trains are composed of two locomotives and four stainless steel passenger cars. Later this year, the first completed trainset is expected to leave Sacramento and be delivered to Brightline at its maintenance facility in West Palm Beach, Fla.