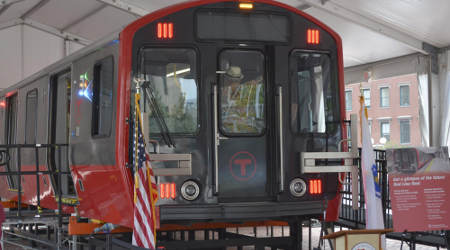 The mock-up is two-thirds the actual size of the new cars, but it showcases the units' amenities and general aesthetics. The new units will feature wider door openings for easier boarding, minimized gaps between the platform and car door, dedicated accessibility areas, and audio and visual passenger information, according to an MBTA press release.

The cars also have the latest propulsion and braking systems to allow for a three-minute headway between trains, which will reduce wait times.

In March, MBTA staff traveled to Changchun, China, to evaluate the mock-up car.

In April, CRRC MA Corp. — the company's North American subsidiary — completed construction of its rail-car manufacturing plant in Springfield. The plant is equipped with a 2,240-foot test track and staging/storage area to accommodate assembly of all 404 rail cars for the MBTA.

Production of the Orange Line rail cars is expected wrap up in December. Assembly of the Red Line units will begin in 2019. Delivery of both fleets will continue through 2022.

"The MBTA is investing nearly $2 billion in the Red Line as part of the Red Line/Orange Line improvement program, which includes procuring these new Red Line vehicles," said Massachusetts Department of Transportation Secretary and Chief Executive Officer Secretary Stephanie Pollack. "The upcoming new fleet for the Red Line, coupled with new and improved track, signals and other core infrastructure upgrades translates to a better, more reliable service for MBTA customers."

The agency has already begun operator training on its new Orange Line cars.