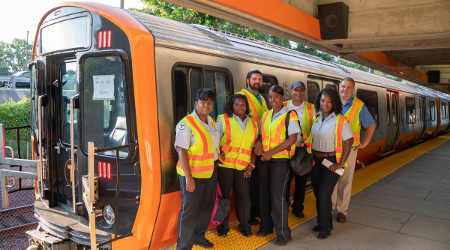 The Massachusetts Bay Transportation Authority (MBTA) has begun training operators on its new Orange Line rail cars, as the agency preps to launch train service on the line by year's end.

The first stations to be rehabbed are those along the Needham and Fairmount lines. Work is slated to begin Aug. 11 and continue through Sept. 9. During five weekend closures over that time period, crews will repair stairways and concrete, remove graffiti and trash, and replace signage and old system maps.

The MBTA plans to schedule improvement projects at additional commuter-rail and subway lines in the coming months.

"In addition to the significant investments we are making to improve system reliability, these aesthetic and safety upgrades at stations will further enhance our customers' travels," said MBTA General Manager Luis Manuel Ramirez in a press release.

From earlier this morning, regularly scheduled training exercises were underway with the goal of putting the first new Orange Line train into service by the end of this year. pic.twitter.com/9DUgRNlxDt