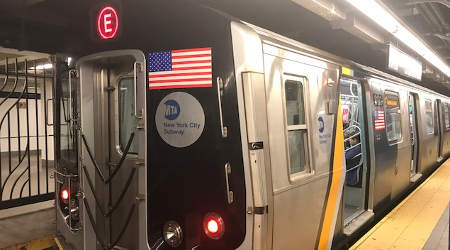 The Metropolitan Transportation Authority (MTA) has returned to service the first round of rail cars that were refurbished as part of the agency's recent subway improvement plan.

Before the R-160 cars re-entered service on the E line, crews replaced each trainset's "master controller," which is the system responsible for braking and accelerating the trains.

The master controllers were identified as a leading cause of failure on the R-160s, MTA officials said in a press release.

Workers also removed seats at the ends of each car to increase capacity and reduce passengers' time for boarding and disembarking. The seat removal is expected to boost capacity in each train by 80 to 100 passengers.

The refurbished R-160 units are part of a 100-car pilot aimed at increasing overall capacity and improving performance reliability of the subway car fleet.

"We do not have time to waste when it comes to improving the customer experience and service for our riders," said MTA Chairman Joseph Lhota, who unveiled the agency's Subway Action Plan in July. "This pilot goes directly to the heart of that goal by attacking a significant cause of failures on these cars and making a fast, targeted improvement."

The updated cars feature improved stanchions and hand rails, LCD screens with service information, and LED lighting The MTA also added an interior and exterior wrapping to the cars to identify them as part of the pilot.