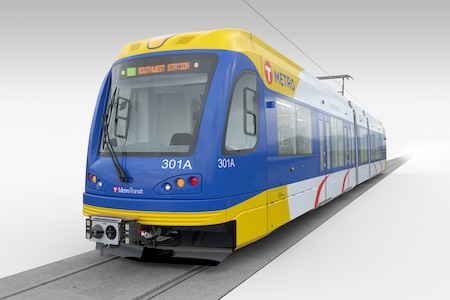 The Minneapolis-area Metropolitan Council yesterday awarded a $118 million contract to Siemens to build 27 light-rail vehicles for the Green Line extension.

Siemens provided Green Line vehicles five years ago; the council's action authorizes the company to begin engineering updates for new units. The new vehicles will feature improvements such as a redesigned middle section to improve passenger flow and ice cutters to remove sleet from overhead wires.

Modifying the existing vehicle design instead of developing a new one is expected to save money by reducing the amount of training needed for operators and maintenance staff, Met Council officials said in a press release.

The move also is expected to cut costs by reducing storage space needed for parts, tools and future vehicle overhauls.

Each new unit will hold more than 200 people when fully loaded.

The contract gives the council the option to purchase another 50 vehicles if needed for the Blue Line extension.