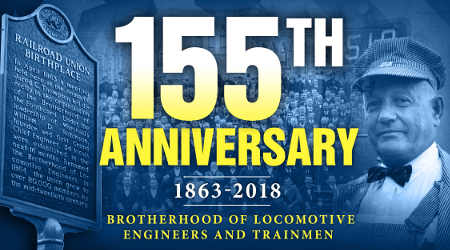 The Brotherhood of Locomotive Engineers and Trainmen (BLET) marked its 155th anniversary yesterday.

The union was founded on May 8, 1863, in Marshall, Michigan, as the Brotherhood of the Footboard. In 1864, the group changed its name to the Brotherhood of Locomotive Engineers (BLE), the name it retained for 140 years until merging with the International Brotherhood of Teamsters on Jan. 1, 2004, when it became the BLET.

The BLET is the oldest labor union in the Western Hemisphere, BLET officials said in a press release.

Locomotive engineers formed the organization in the 1860s after they became discouraged with pay cuts and the dismissal of their firemen. At the time, locomotive engineers at the Michigan Central were paid at the rate of $60 a month on the condition that they ran at least 2,500 miles each month, regardless of the time consumed.

The National Division of the BLET has maintained a website since 1996, ble-t.org, posting daily news stories and periodic News Flash updates that are emailed to thousands of members.