Wylie eventually grew around a line established by Santa Fe subsidiary Gulf, Colorado and Santa Fe Railway. And now, the municipality situated 24 miles from downtown Dallas is counting on growth stemming from a new Kansas City Southern intermodal terminal — primarily in the form of industrial development and job-creation opportunities.

KCS is completing a $50 million, 92-acre intermodal facility in Wylie to replace a cramped, landlocked Dallas terminal it acquired from the Santa Fe in 1994. Slated to launch operations in July (a tentative opening date of July 11 has been set), the Wylie hub features 270 adjacent acres, 9,400 feet of working track and a 342,000-unit annual lift capacity versus the 89-acre Dallas facility’s 5,600 feet of working track and 168,000-unit lift capacity.

Dallas is a vital intermodal market for the Class I, both as an origin and destination point for goods transported in containers, and as a gateway between the East and West, said KCS spokeswoman Doniele Carlson in an email. The railroad carries a significant amount of intermodal volume between points in the Southeast and Dallas.

Since the old terminal is operating well above its originally planned capacity, a new intermodal terminal with nearly twice the capacity is necessary for KCS to continue posting business growth in the Dallas market, said Carlson.

“With city property bordering the Dallas facility on all sides, there are no further expansion possibilities. The significant growth in the Dallas market has only been possible over the past couple of years due to efficiency gains derived from process and flow improvements,” she said. 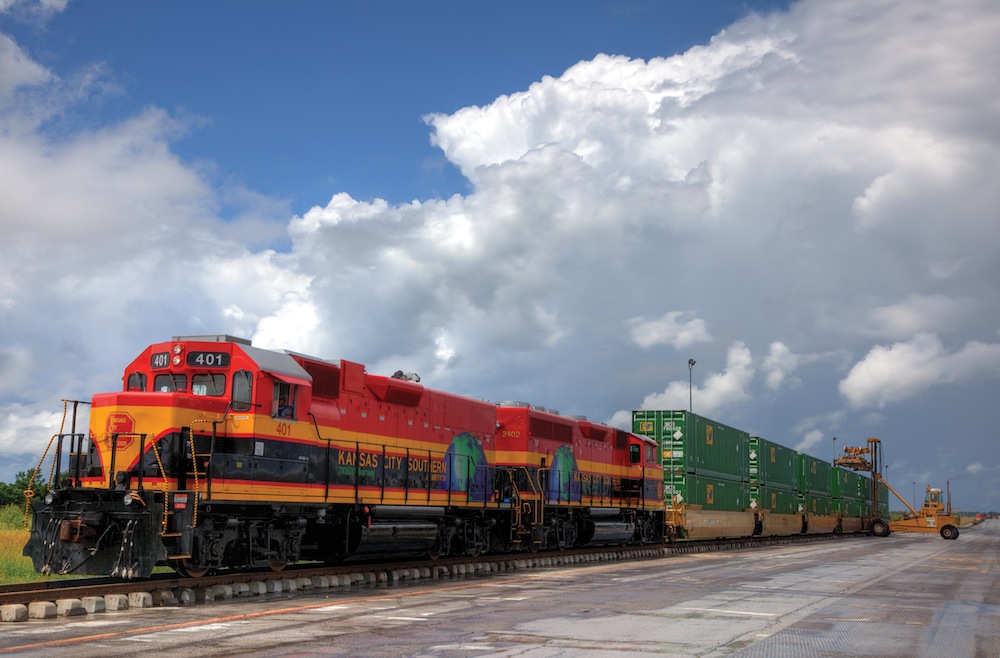 KCS The Dallas area is a key intermodal market for the railroad.
In addition to providing more space, the Wylie terminal will help boost operational efficiency, said Carlson. The facility will feature an automated gate system, a biometric scanning system for truck drivers, better yard planning and traffic flows due to the increased footprint, more than 1,500 parking spaces and bridge crane operation of two 5,000-foot strip tracks.

Expansion options were incorporated into the project, as well. KCS acquired land in and around the new hub to ensure space was available for additional infrastructure.

“When it becomes necessary, capacity can be relatively easily expanded in the future, both in terms of yard/parking space and additional tracks,” said Carlson.

Local officials have been supportive of the terminal, which they believe will “create a catalyst for future job growth and planned development in the community,” she said.

The terminal is expected to generate development at a 250-acre light industrial park that’s proposed on the south side of the KCS facility, facing State Highway 78. The city estimates the park’s minimum taxable value at $313 million. Featuring more than 2 million square feet of developable space, the park will help promote north-south commerce, Wylie officials say.

“We believe that there is great potential for economic growth as new businesses see the advantage of locating in close proximity to the KCS facility,” says City Manager Mindy Manson. “Wylie is prepared to work closely with KCS to develop their adjacent property as a business park that will create jobs, enhance the property value and provide growth opportunities for both the city and railroad.”

Although KCS currently has no plans to build additional intermodal facilities after the Wylie terminal is completed, the railroad will focus on enhancing efficiency at existing terminals and expanding capacity where necessary, said Carlson.

“The capital investments in the intermodal area will continue in the years to come to secure efficiency and foster growth,” she said.