For KCS leaders, a sharper technological acumen plus PTC will equal a more data-driven organization 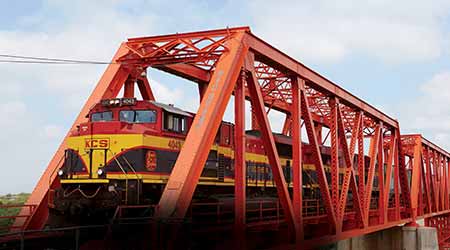 In May, the Association of American Railroads (AAR) released a white paper that highlights how freight railroads’ ongoing technological pursuits are boosting their safety, efficiency and reliability.

“America is home to the greatest freight-rail network in the world, and we are putting technology to work to keep it that way,” said AAR President and Chief Executive Officer Ed Hamberger, who last month announced plans to retire. “Next-generation innovations like drones, lasers and automated technologies are revolutionizing how we run a railroad.”

Continually adopting the most promising innovations — from business analytics software to blockchain technology to artificial intelligence (AI) — will help the Class I accomplish its ongoing mission to become North America’s fastest-growing, best-performing and most customer-focused transportation provider, senior executives say. Moreover, KCS will be better positioned to reach its long-range goal of operating a more automated rail network, they believe.

A technology in and of itself may or may not be disruptive, depending on how it changes the way the user conducts business. For example, autonomous trucks, cars and trains could in some cases disrupt business and social models.

“The world around us is changing, which could change our relevance in the world,” says Ottensmeyer. “We want a better approach to make sure we’re aware of all the technologies there are to find and yet defend ourselves from future threats.”

Therefore, it’s better to focus on locating the right “haystacks,” or groupings, of emerging technologies than exerting a lot of effort trying to find one specific “needle,” or innovation, he says. KCS has grouped a number of technology developers — from typical providers like Railinc Corp. and IBM to emerging facilitators such as Plug and Play and Techstars — into common haystacks to better monitor current and emerging innovations (see KCS-provided chart below).

“How we manage our resources to focus on the right [technologies] can be overwhelming. It takes time and money to drive to a conclusion and get a result that’s useful, with time being the most valuable,” says Ottensmeyer. “Our strategy is to match up people in our company with haystacks to leverage our resources to hopefully be more effective and efficient.” 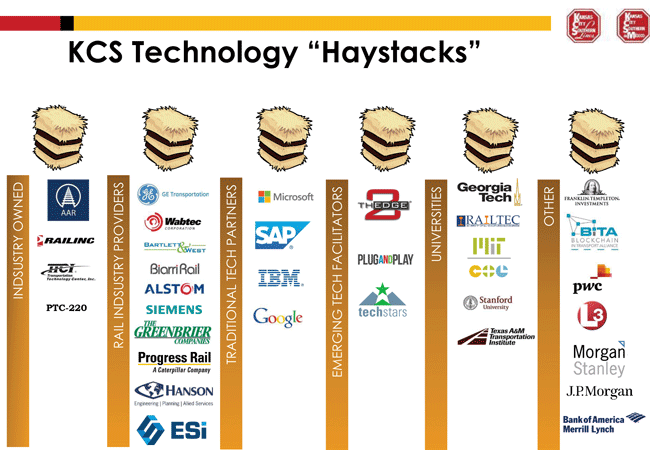 Ownership of the strategy will cascade from the top down to ensure the right resources are matched with the right technologies and/or haystacks and tech partners, he says.

“We will analyze opportunities, review the progress we’re making on initiatives, see how productive the haystacks are becoming, and determine whether we’re spending time and money on the correct priorities,” says Ottensmeyer.

KCS also is counting on its board to provide valuable ideas and feedback. Last year, the Class I added four additional directors — increasing the total seats from eight to 12 — to help broaden the skill sets and technological knowledge among members.

Janet Kennedy, who joined the board when she was president of Microsoft Canada, now manages Microsoft’s digital transfer strategy and is “a wonderful resource to tap,” says Ottensmeyer. Another new member, FedEx Ground President and CEO Henry Maier, is deeply involved in the same issues as KCS and has a customer perspective, Ottensmeyer notes. Kennedy and Maier were re-elected as directors last month.

“We want to engage the entire organization,” says Ottensmeyer. “Technologies can be very specific to an application, but a lot are cross-functional.”

When it comes to the innovations KCS has or soon expects to adopt, many target multiple areas within the company, including operations, finance, information technology (IT) and customer service. Count Microsoft’s software-as-a-service Power BI, which the Class I began to employ in March 2017, among them.

The power of Power BI

The service now is used across almost all functions, says CIO Naatz. Power BI includes business planning tools that enable a user to better visualize and respond to data so they can make faster, fact-based and actionable decisions, he says. KCS employees use it to build dashboards for process management.

For example, the first dashboard created with the service provides a better visualization of where late trains are located. In the past, a computer-generated report listed all late trains, but it was hard to identify any trends with a spreadsheet, says Naatz.

“With Power BI, you can see there might be a bottleneck in a part of the network,” he says. “By plotting points on a map and using colors to identify the condition of trains, we see where we’re fluid and where we’re constrained. Then we can take very specific actions to address the situation.”

KCS also hopes to gain similar operational efficiency — as well as enhanced data security — from blockchain technology. Through a shared, distributed ledger, supply chain participants use blockchain to more securely access and share vital shipment information, including contracts and freight data. The technology is designed to provide consistent freight visibility and condition reports throughout the supply chain, and identify which party is responsible for each action during a shipment.

In April, KCS joined the Blockchain in Transport Alliance, which aims to leverage blockchain technology within the supply chain by developing a standard framework and encouraging widespread adoption. The Class I is focusing on the digital ledger side of blockchain and not the financial side, says CMO Hancock.

For now, the technology will be focused on containers from China that are transported by KCSM and KCSR from the Port of Lazaro Cardenas, Mexico, across the border to Laredo, Texas, and then northbound to various points. During a crossborder shipment, 10 to 15 companies are involved, including drays. Blockchain will help ensure all data that’s submitted electronically can’t be changed or manipulated, says Hancock.

In late 2017, KCS launched a blockchain pilot on crossborder fluidity with Maersk and IBM. The parties are working with customs and border agencies in both Mexico and the United States to determine ways to speed northbound containers through customs. Other elements of the effort involve implementing international crews and enhancing unified cargo processing.

If all paperwork submitted at the border was digital and transmitted days before arrival, a train could cross the international bridge seamlessly, essentially doubling the bridge’s capacity, says Hancock.

“In Laredo, 16,000 trucks on average sit at the border every day to clear customs. If we put it on rail and it went across the bridge without stopping, we could pick up a day in transit,” he says.

By fall, the pilot partners expect to develop a viable process map featuring blockchain technology that could serve as a fluidity solution.

In the meantime, KCS will continue working with CloudMoyo to modernize IT systems. In 2016, the Class I deployed the company’s cloud-based Crew Management-Mexico Crew Call system for KCSM. Using automation and real-time data, the system matches demand based on a various factors such as hours of service constraints, and worker availability and seniority.

Now, CloudMoyo — which also provides business intelligence and advanced analytics services to the railroad — is helping to modernize the Class I’s management control system (MCS) operating platform. KCS will deploy the CloudMoyo Rail Transportation Management system, which is designed to leverage the scale of Microsoft’s Azure cloud and harness analytics and artificial intelligence to improve operational efficiency and agility. The railroad plans to implement the system in phases over the next three years.

“MCS is 20 years old and was not built to optimize mobile technologies or communication infrastructures like blockchain or Power BI,” says Naatz. “Current, contemporary technology allows us to leverage future technologies — that’s where our partnership is going.”

In addition, KCS is working with Biarri Rail to implement better operations planning tools for dispatching and new locomotive distribution models, he says.

PTC’s information-sharing functions, wireless data communications and edge computing capabilities lay a framework for other technological advancements — autonomous train operations, vehicle inspections and track inspections among them, senior execs say. Edge computing refers to the processing and use of information at the data-generation source instead of sending information back and forth between a source and data center.

“We’ve gone from a world where a year or two ago, the talk was about what a bad idea PTC is, to how PTC will be a springboard that could be really transformational,” says Ottensmeyer.

For example, onboard PTC systems will help transform KCS’ locomotives into rolling data centers. Other onboard devices already capture video inside and outside a locomotive, and collect track infrastructure data. In some cases, the data can be processed on a locomotive instead of in a traditional data center via edge computing, says Naatz, adding that KCS expects to do more of the computing in the future. 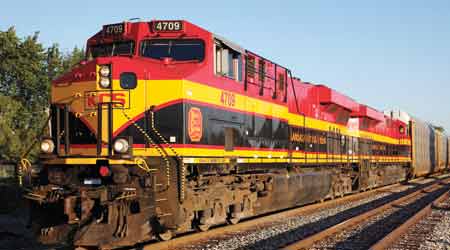 The Class I also aims to continue following a path toward a more automated rail network — not necessarily with driverless trains, but perhaps with advanced cruise control and train-handling techniques, some remote train operation and other related functions.

KCS has developed a strategy that maps out an “unconstrained path” to a fully automated railroad, says Ottensmeyer. Among the constraints that aren’t yet factored in but would need to be considered: regulatory hurdles at federal, state and local levels; labor issues; and public concerns about automated trains.

“We want to lock on it and deal with the obstacles or roadblocks that could delay it or make it impossible. It’s important to have that vision, to think longer term,” says Ottensmeyer.

Also a ways off but high on KCS’ radar: AI, robotics, machine learning and autonomous drays. AI would provide a step from PTC to an automated rail network, says Ottensmeyer.

Last year, the railroad partnered with technology startup accelerator Plug and Play, which works with startups that are focused on creating applications for such cutting-edge advancements as AI, machine learning, the Industrial Internet of Things and advanced supply-chain analytics.

For now, KCS continues to identify and prioritize haystacks in an attempt to keep tabs on emerging technologies. Although it’s a daunting exercise, it wouldn’t benefit the company to hire hundreds of people to try to duplicate certain innovations or flip to a finding-the-needle strategy if a haystack doesn’t pan out, says Ottensmeyer.

“We want to do this more thoughtfully,” he says.