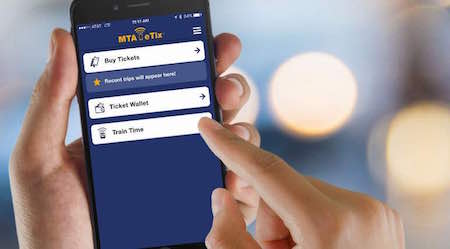 The new technology eliminates the need for passengers to enter credit card numbers, billing information or security codes to complete a transaction, according to a press release issued by New York Gov. Andrew Cuomo's office.

"We believe that the addition of these secure payment options will help us to do an even better job of meeting the needs of our customers, and we look forward to further building the user-base for the app in the weeks and months ahead," said MTA Chairman and Chief Executive Officer Thomas Prendergast.

In July, Cuomo announced plans to speed up rollout of MTA eTix on Metro-North and LIRR. The app debuted on LIRR's Port Washington Branch and Metro-North's Hudson Line on June 30; it became available on the railroads' other lines on Aug. 22.

The app is powered by Masabi's JustRide ticketing platform, which has been used by other U.S. transit agencies, including Southern California's Metrolink.