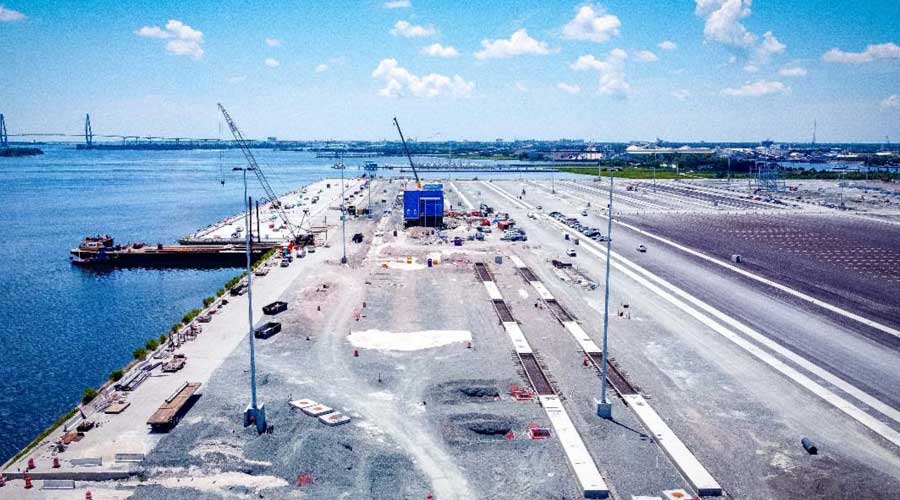 Construction of the Hugh K. Leartherman Terminal at the Port of Charleston is on schedule for a March 2021 opening, South Carolina Ports Authority officials said yesterday.

Engineering and construction teams reached several key construction milestones this summer, as the terminal continues to take shape. Among them: Crews finished the final concrete pour for the wharf deck in July. That work was critical to the preparation of the 1,400-foot wharf to handle some of the tallest ship-to-shore cranes on the East Coast, which will work some of the largest ships on the water, port officials said.

Also, foundations have been installed and steel erection work has started for the six-story-tall refrigerated container racks, which will enable S.C. Ports to handle more refrigerated and frozen goods for shippers. In addition, concrete and asphalt paving throughout the site is ongoing, while construction of the South Carolina Department of Transportation's Port Access Road is progressing, they said.

Vertical construction is nearly 70 percent complete, as many onsite buildings are taking shape, including buildings that will house terminal operations, vessel operations, maintenance. Dominion Energy is stringing power lines via helicopter to connect power to the terminal's private substation.

S.C. Ports is in the final year of a six-year capital improvement plan, a culmination of years of strategic infrastructure planning and $2 billion in investments. The Leatherman Terminal complements efforts to modernize Wando Welch Terminal and deepen Charleston Harbor to 52 feet. These investments will enable S.C. Ports to handle four 14,000-TEU vessels simultaneously in 2021, port officials said.