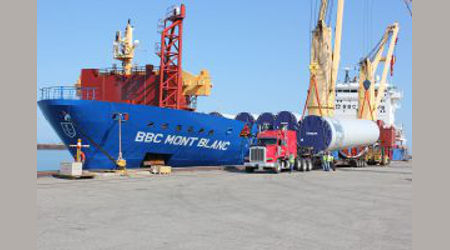 The Port of Indiana-Burns Harbor last week received its first ocean vessel of the year, marking the opening of the port's international shipping season.

Port stevedore Federal Marine Terminals and workers from the International Longshoreman's Association and International Union of Operating Engineers unloaded the components, which will be transported to a wind farm in Illinois.

"The arrival of the first ocean ship of the new year is an exciting time not only for our port, but also for our port companies and numerous other regional businesses that rely on the cargoes these vessels carry," said Port Director Ian Hirt. "For northwest Indiana, the opening of the St. Lawrence Seaway each spring is always a symbol of optimism because it reestablishes a direct connection to global markets and new business opportunities."

The St. Lawrence Seaway opened its locks to ocean vessels for the 59th navigation season on March 20 after closing in late December 2016.