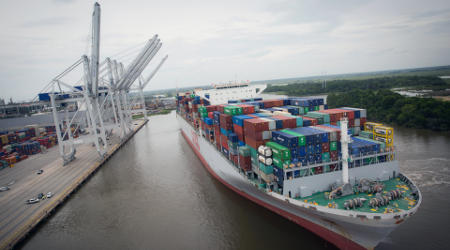 The gain amounted to an additional 325,000 units in FY2018 over FY2017. The port authority capped the latest fiscal year, which ended June 30, with its 20th consecutive month of year-over-year volume growth, GPA officials said in a press release.

"Moving more than 4 million TEUs in a single fiscal year is an important milestone for Georgia," said GPA Executive Director Griff Lynch. "Georgia's logistical advantages, along with the Southeast's population growth, have resulted in increased demand, while the expanded Panama Canal has cleared the way for larger vessels to call Savannah."

In addition, intermodal rail lifts surged to 435,000, an increase of 16 percent, or more than 60,000 additional moves — another fiscal-year record for the GPA.

Also today, the GPA board approved construction of an $8.8 million overpass, part of the $127 million Mason Mega Rail project that, upon completion, will allow 10,000-foot unit trains to be built on terminal at the port.

In August, the GPA expects to open its Appalachian Regional Port, an inland rail terminal that is projected to remove 50,000 trucks from Georgia highways annually, according to authority officials.