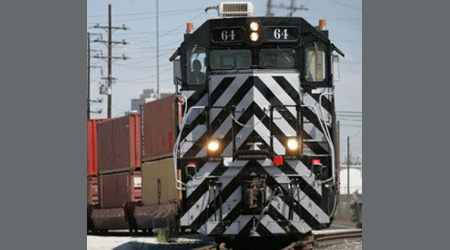 The Port of Long Beach will use a $14 million grant to help pay for construction of a new departure track for trains serving four of the port's six container terminals.

Awarded by the Trade Corridor Enhancement Program, the grant will fund the port's Pier G and J Double Track Access Project, which is designed to allow for better use of the on-dock rail yards at Piers G and J. The new 9,000-foot track will enable the yards to simultaneously handle arriving and departing trains, port officials said in a press release.

"Moving goods by rail is four times more efficient than by truck, so this project would enhance our operational excellence and environmental sustainability," said Mario Corder, the port's executive director.

Also when completed, the project — which is a "vital" piece of the port's $1 billion rail infrastructure capital improvement program — will eliminate an existing bottleneck, port officials said.

Project construction is slated to begin by late 2019 and be completed by mid-2021.