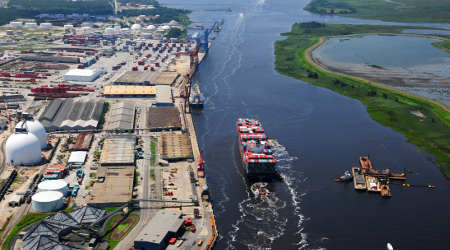 The Port of Wilmington recorded a year-over year container volume increase of 23 percent.

"The increase in container moves at the Port of Wilmington is a testament to the commitment NC Ports has made in improving its infrastructure to meet and exceed customer demand," said NC Ports Executive Director Paul Cozza in a press release. "We are proud that we could maintain this annual growth especially after the impact of Hurricane Florence."

Port officials attributed the increase in part to the organization’s model of best-in-class gate truck turn-times and high crane productivity rates, as well as NC Ports’ investment in terminal improvements in Wilmington. CSX provides intermodal service at the Wilmington port, while Norfolk Southern Railway serves the Port of Morehead City.

"The Port of Wilmington received two of its three new neo-Panamax cranes during 2018 and the port welcomed its largest container vessels to date. The installation of our larger cranes allow us to accommodate larger vessels which in turn contribute to higher volume through the port," noted Cozza. "We expect NC Ports to continue to see this type of record growth as we advance our aggressive $200 million expansion plan."

The Port of Wilmington was forced to suspend vessel operations for a week and commercial truck operations for nearly two weeks in 2018 due to Hurricane Florence.