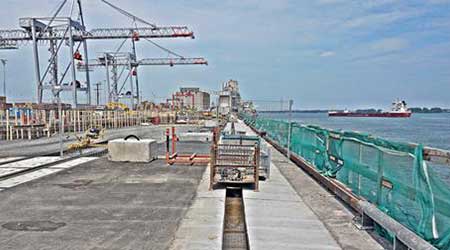 Since a first phase was completed in 2016, the terminal has handled about 350,000 containers annually. Pegged to start in September and conclude in late 2020, the second phase is designed to boost annual capacity to 600,000 containers.

The expansion will enable the Port of Montreal to accommodate anticipated container volume growth and reach its maximum capacity on the Island of Montreal: 2.1 million 20-foot equivalent units, MPA officials said in a press release. The port operates its own rail network, which connects with CN and Canadian Pacific lines.

The second phase will be funded by the Canadian government, MPA and LOGISTEC, which plans to provide CA$30 million.

"We are pleased to be able to complete the Viau terminal project, a sign of the steady growth of the container market in Montreal," said MPA President and Chief Executive Officer Sylvie Vachon.

The next key milestone in the MPA's strategic growth development plan is the construction of a major container terminal at Contrecoeur, which is projected to open in 2023 or 2024.

The Viau and Contrecoeur terminal projects will strengthen the port's role in Montreal's supply chain, and continue to act as engines for economic development and job creation, said Vachon.