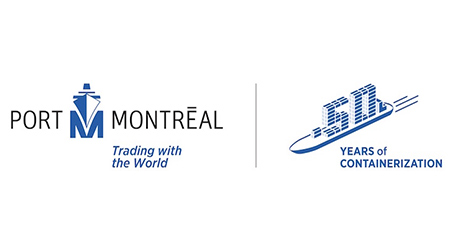 The Montreal Port Authority (MPA) yesterday marked the 50th anniversary of container shipping at the Port of Montreal.

Over the past 50 years, nearly 35 million TEUs have moved through the port, which now is the only container port on the St. Lawrence River and the largest in eastern Canada, MPA officials said in a press release. The port operates five container terminals and is served by CN and Canadian Pacific.

“I am pleased to celebrate the 50 years of containerization that forged our history. Containers are literally in our DNA at the Port of Montreal,” said MPA President and Chief Executive Officer Sylvie Vachon. “To address growth in the container market, we inaugurated the new Viau terminal in 2016 and we are working on our project for a new container terminal at Contrecœur, ensuring the future of container handling for Montreal and the whole of Quebec.”

The ties between the port and CN have remained tight since the first half of the 20th century, said CN Executive Vice President and Chief Marketing Officer Jean-Jacques Ruest.

“Every day, our container trains enter and leave the Port of Montreal, enabling both our organizations to provide reliable, efficient and secure transport to our markets in Canada and the United States,” he said.

CP has been operating in the Montreal area for more than 135 years and has had a strong relationship with the port over that time, said Jonathan Wahba, the Class I’s VP of sales and marketing-intermodal and grain.

“We were there when the first containers arrived 50 years ago, and we remain here today at this essential transportation hub,” he said. “It’s an honor to celebrate this milestone with the Port of Montreal, especially given our history in this location with CP Ships and the history of our company in Montreal.”