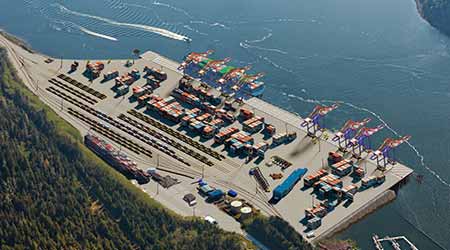 The first project, which involves building a double-track bridge across the Zanardi Rapids, is designed to increase rail capacity on key rail routes and accommodate growth in imports and exports at the port. Trains will be able to arrive and depart simultaneously across the expanded bridge, Transport Canada officials said in a press release.

The Prince Rupert Port Authority will lead that project.

The second project is aimed at adding rail capacity and reducing rail congestion to better serve the bulk and container facilities on Ridley Island.

The third project, led by the Metlakatla Development Corp., targets land development for import and export logistics facilities located near the Fairview Terminal and a container yard. The facilities will provide capacity adjacent to the port, from which 175,000 20-foot-equivalent containers (TEUs) will be loaded and unloaded per year, government officials said.

"These three projects are part of the government's long-term strategy of a stronger West Coast trade gateway," Garneau said.